The clouds are low and swirl in a playful way over the mountains on this late August summer’s day, teasing the landscape with short-lived shafts of light.

With day upon day of grey cloud and rain it has been a poor season in this part of the French Alps - but thankfully the jet stream has re-aligned itself allowing more typical summery days to return.

We are at the winter ski resort of Les Carroz, perched on a 1140 metre plateau high above the valley and just an hour’s drive from Geneva.

Compared to the hectic bustle of its busy winter season between mid-December and late April, life in this traditional Haut-Savoyard village is running at an altogether different pace now.

The resort’s telecabin continues to ply up and down but its tarmac car park lies almost empty, a grey and colourless expanse without the myriad of cars and coaches that boost the local population from the end of each year. 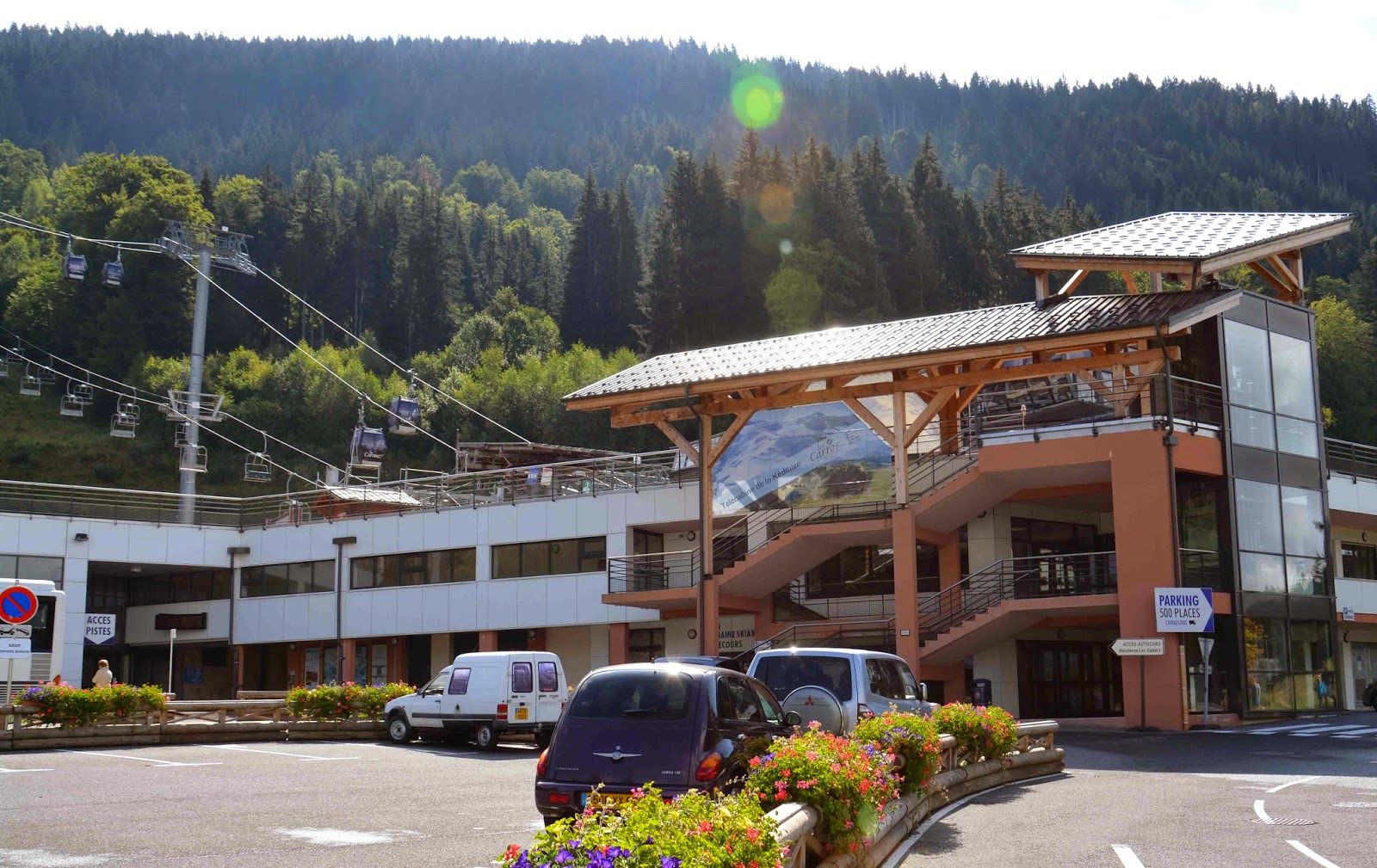 For now this is the territory of walkers, para-gliders and young bikers, the latter spending their long days ascending the telecabin and then careering at breakneck speeds down steep mountain-side tracks.

At the height of winter this snow-covered landscape is truly fit for purpose, the cable cars, ski lifts, snow machines and skiing paraphernalia a relevant and necessary part of the scenery.

Today, this infrastructure seems stark and incongruous as it clings to the steep slopes, a un-natural intrusion against the backdrop of pine trees, the pristine towering walls of rock and Alpine meadows, which even now are bursting with late season colour.

Without their winter dressing of white, the ski-runs lie naked and unromantic, while the steep slopes are cris-crossed with the metal supports and cables of chair lifts which hang silent and still. 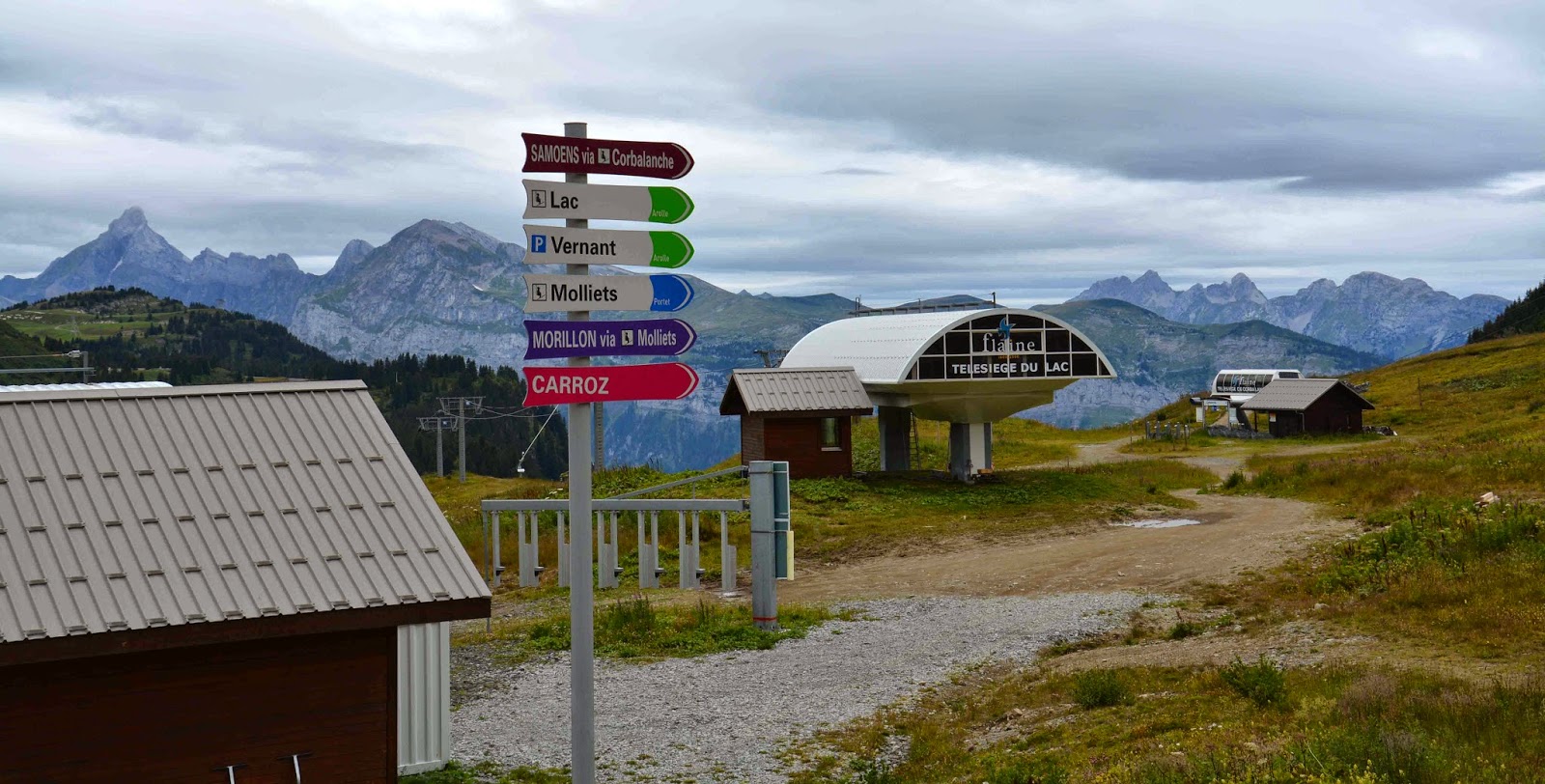 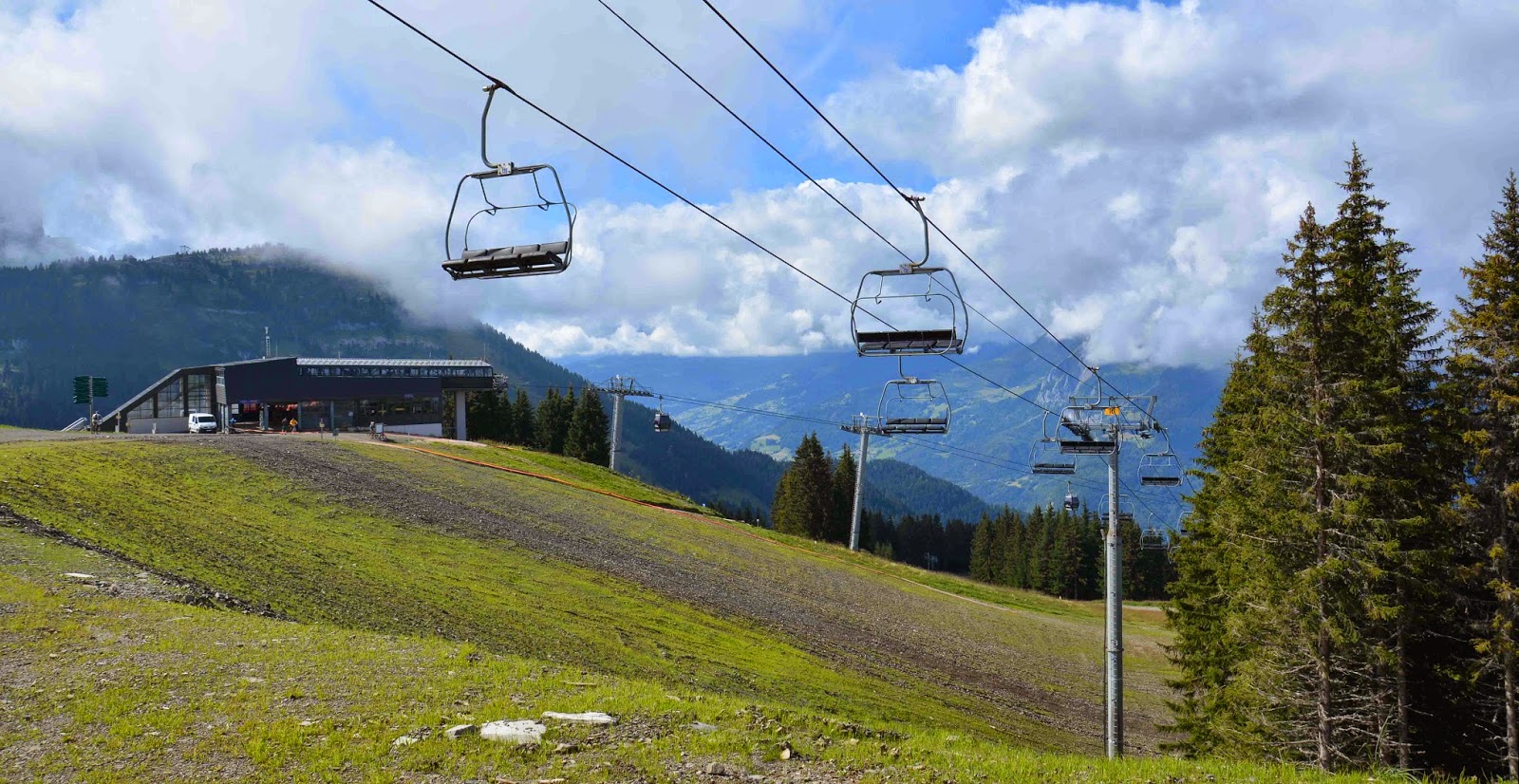 Exposed gravel paths and tracks redefine the summer landscape in a different way too and, without any sunshine to soften it the view is rather harsh and mechanical, like an abandoned theme park where the rides have been shut down.

But, as the clouds roll off a nearby mountain top, a fleeting slither of brightness transforms the view. For a moment it is like the spotlights of a giant theatre being tweaked by some unseen engineer, and we have a glimpse of brilliance that quickly changes both landscape and mood. 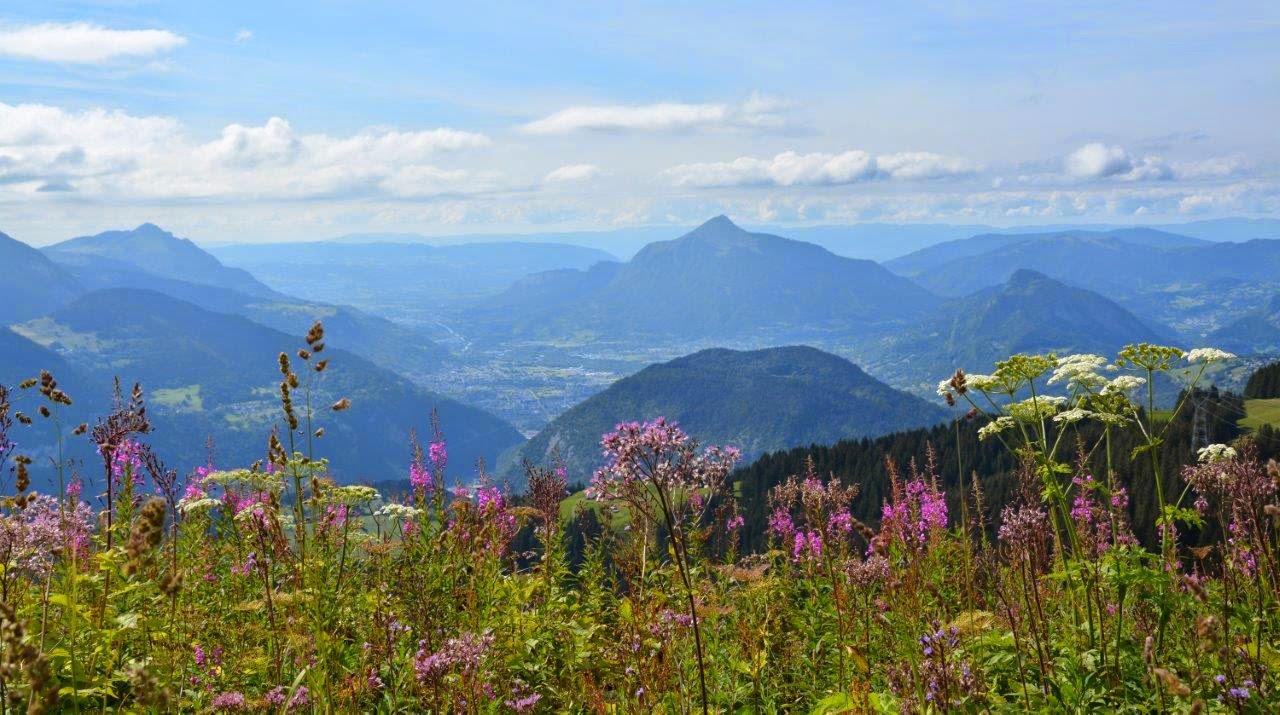 Waiting to board the next telecabin are a host of lean young bikers, well kitted out with padding and helmets, and clutching their small-wheeled and robust looking bikes.

As the first cabin of the next batch swings down in front of us, the automatic doors slide open and the man in charge hauls the bikes in and stacks them three per cabin. It is routine work and he drags on a roll-up at the same time.

We follow in those designated for people and our suspended cabin clunks slowly round the boarding platform before hooking into the uphill cable circuit and whisking us steeply into the air.

Les Carroz is part of an area known as the Massif - which also includes Morillon, Samoëns and Sixt - with a total of 125 km of pistes and 42 lifts. The village itself boasts 32 trails and 15 lifts of its own and is also part of the larger Grand Massif that includes Flaine.

Our upward journey takes just six minutes and I wonder if the young cyclists in the cabin ahead can race down in the same kind of time. 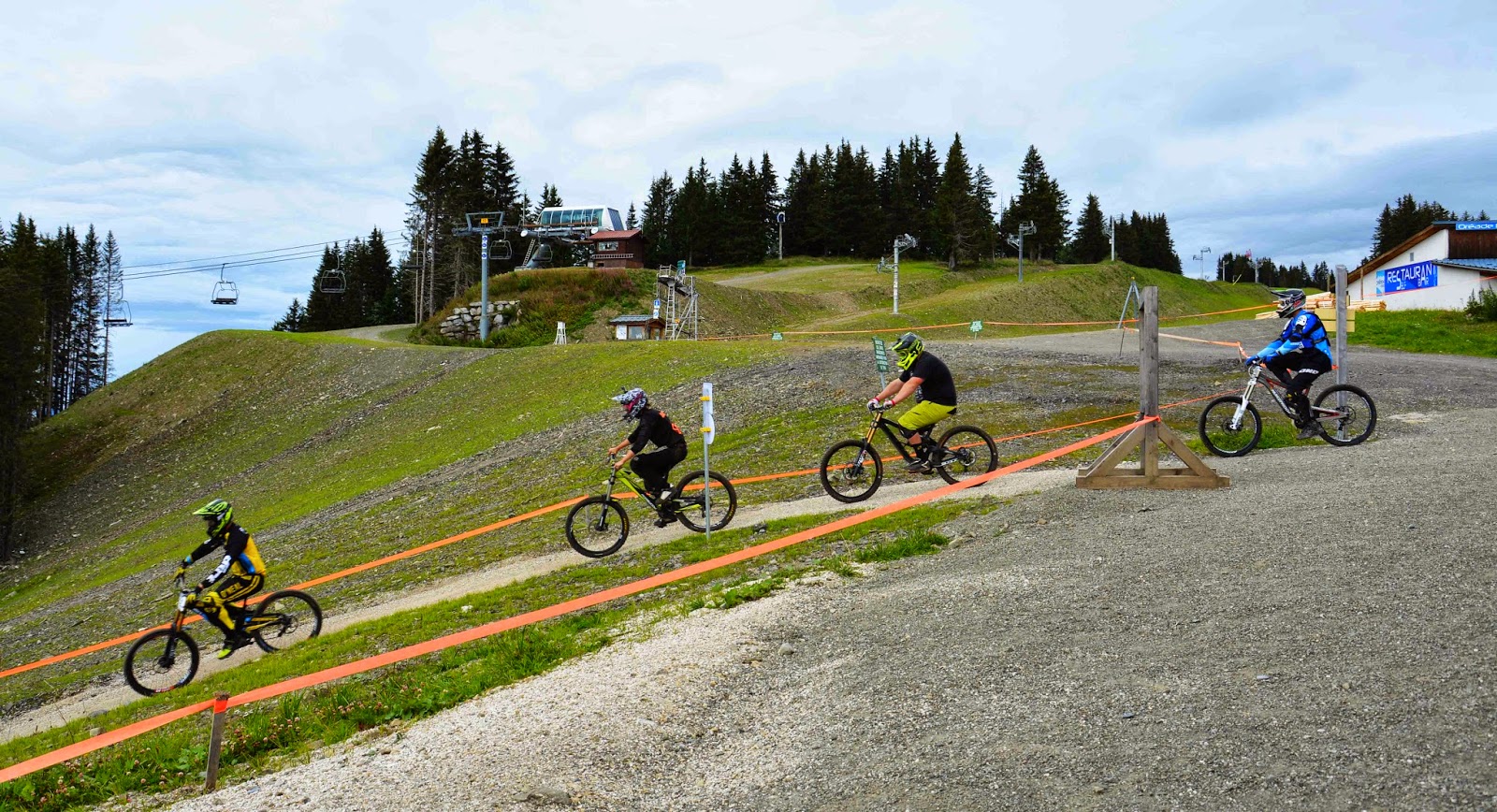 It being a Sunday there are more people about than usual, families and groups from nearby cities out for the refreshing mountain air and invigorating exercise.

We were heading for the Alpage de l’Airon, a restaurant nestling in a natural amphitheatre at 1765 metres, aside a man-made lake that is used to feed snow-making machines in the winter.

There is a steeply sloping descent towards the chalet from the 1882 metre viewpoint of Point du Cupoire where our one and only chance to view the snow-covered summit of Mont Blanc is thwarted by low cloud.

A conversation in a village bar the evening before had led to the recommendation to visit l’Airon, which also doubles as a small local cheese factory, for an outdoor Sunday lunch.

Our destination comes into sight as we drop towards the sheltered valley head, though looking little more than a large cow-shed from our vantage point on the track down. 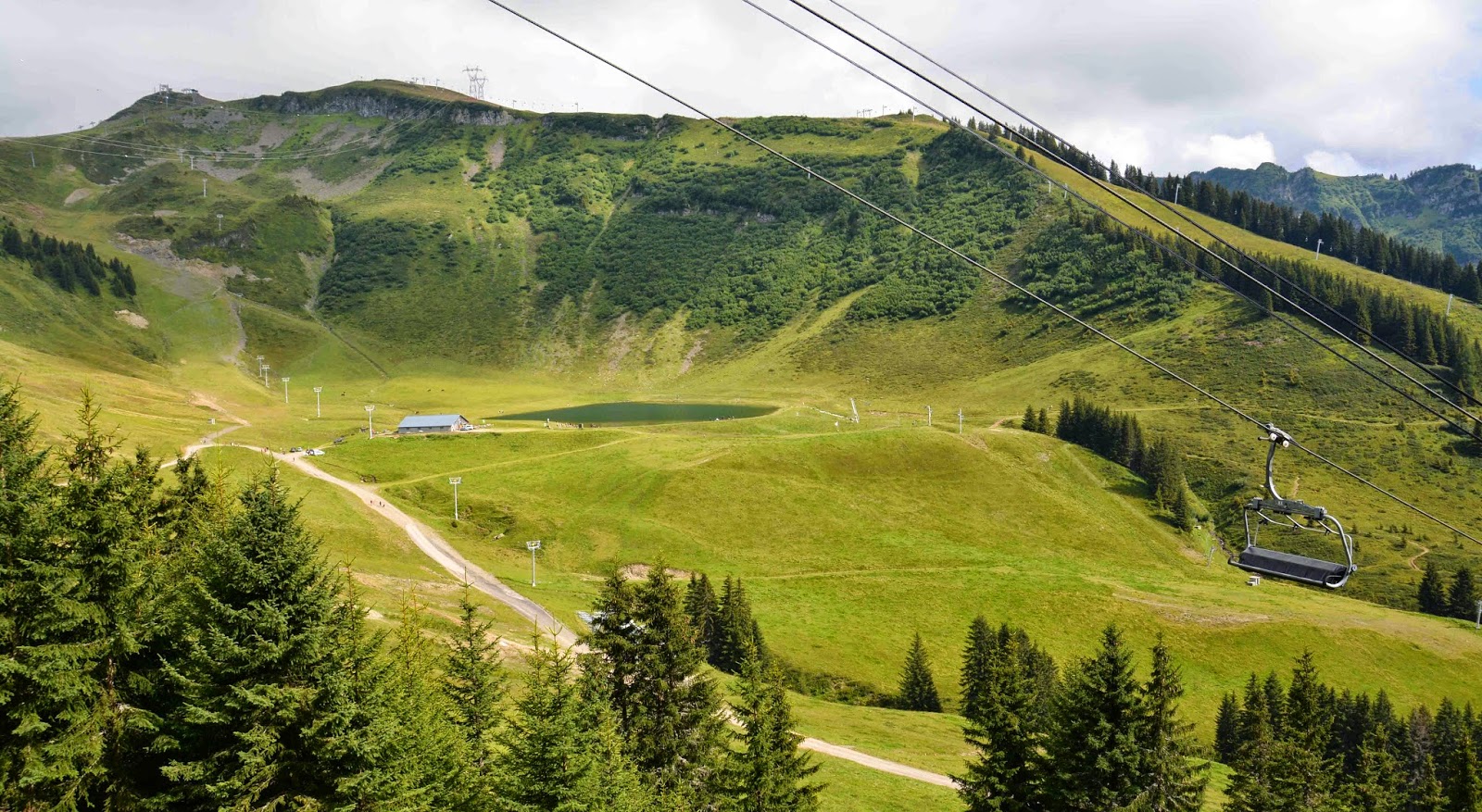 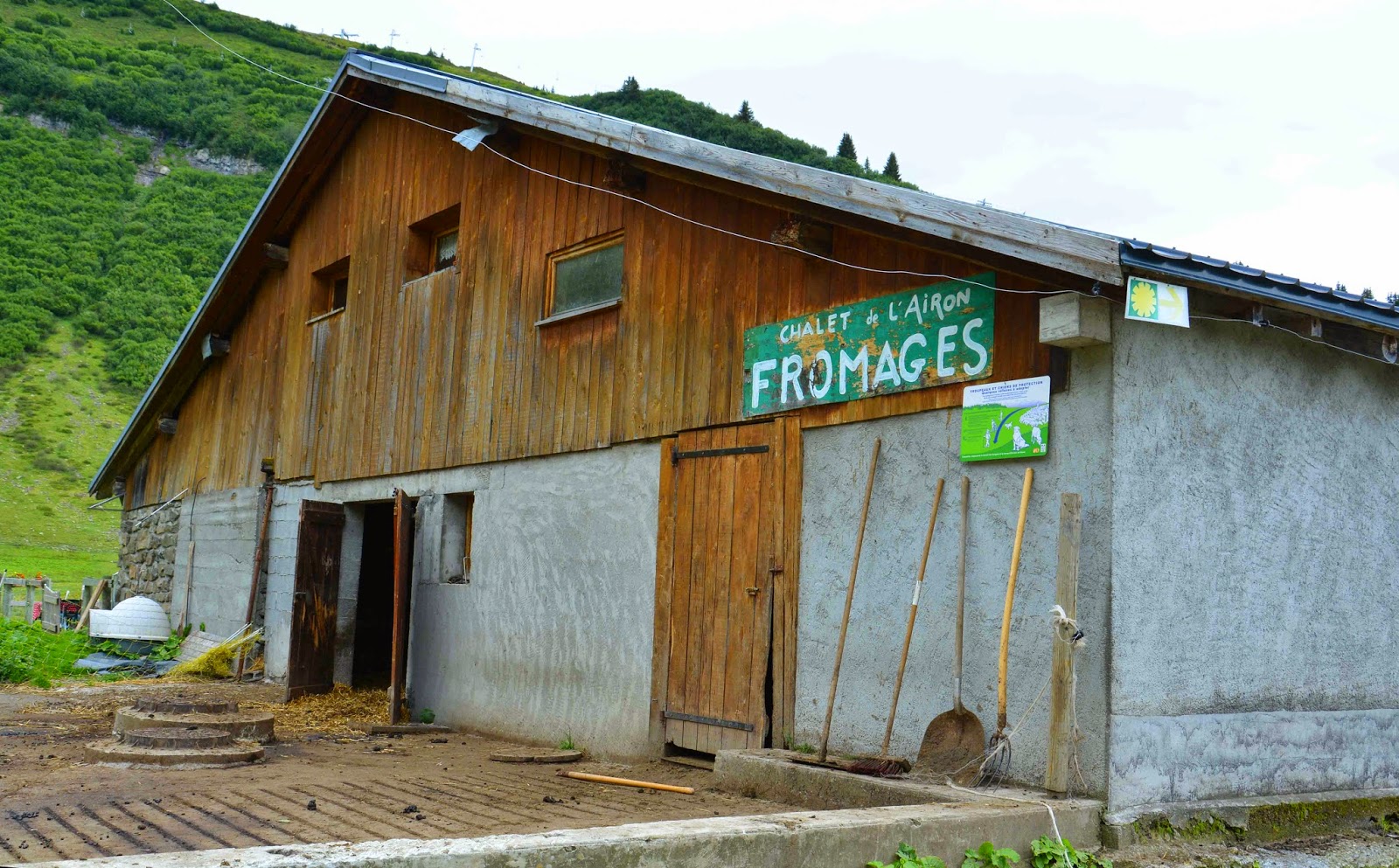 Suspicions were heightened as we approached from the side, adjacent to a straw-filled doorway which was indeed a night-time refuge for the cows and their clanging bells now on out on the far hillside.

Stepping round the corner a large open air patio appeared and, along with it, a sense of relief. It was packed with a colourful array of diners, eating and drinking at several dozen tables. 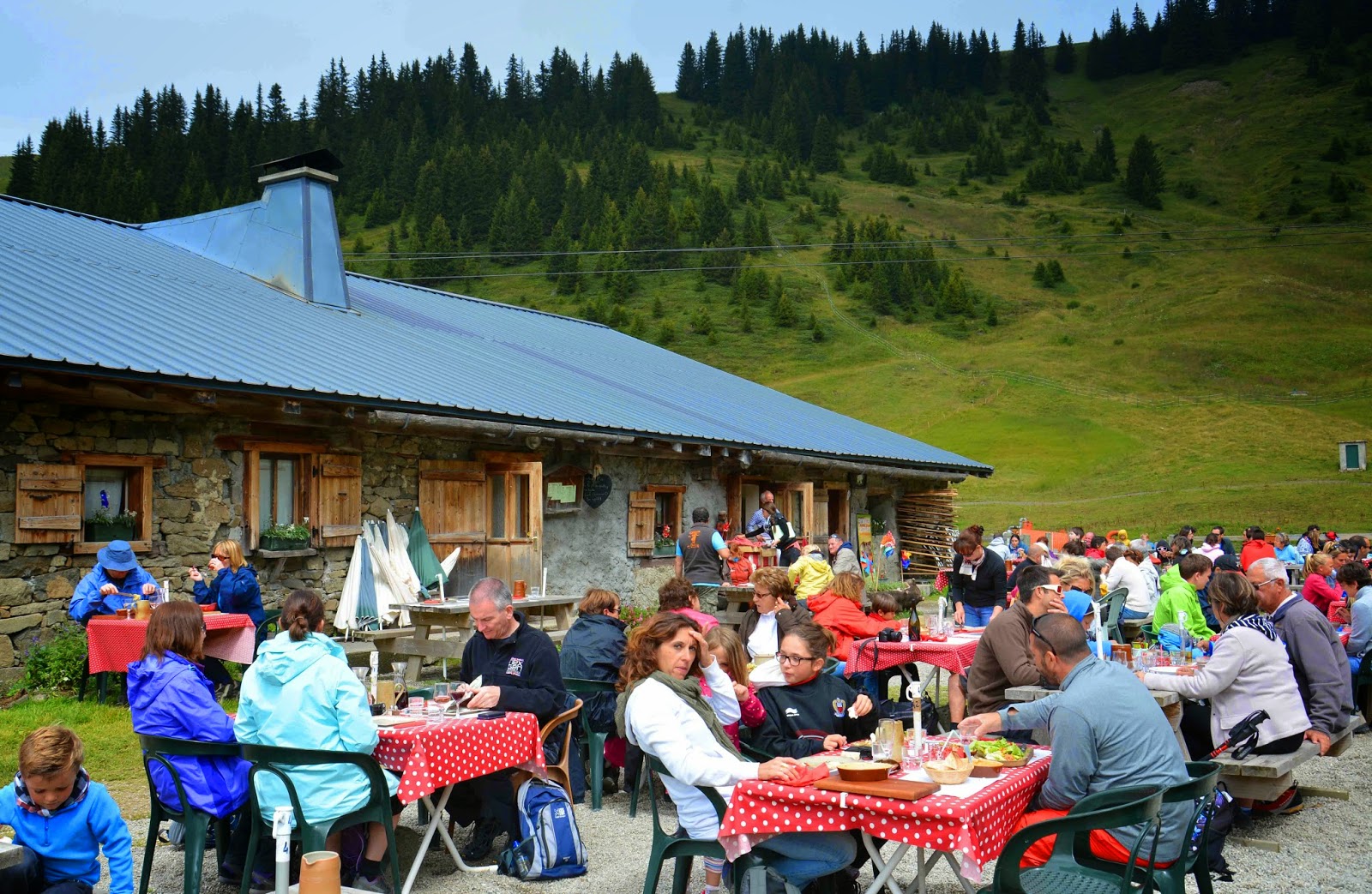 The air was cool but across the valley the sky was beginning to clear, bringing the promise of sunshine and warmth as we reposed with glasses of red wine and perused the mouth-watering menu. It included, of course, the local staple Tartiflette, a rich and indulgent potato dish with lashings of Reblochon cheese.


All photos by Clive Simpson, who is the author of The Lighthouse Keeper blog - for more information, commission enquiries or to re-publish any of his articles click here
Posted by Clive Simpson at 11:12