"This is Ground Control to Major Tim - congratulations on your selection as ESA’s first British astronaut to undertake a mission to the International Space Station (ISS) in 2015; you are cleared for takeoff!"

At a press conference in London this morning (Monday, 20 May) ESA Director General Jean-Jacques Dordain will officially name the first official British astronaut to undertake a space mission for 20 years.

Peake, a former army helicopter test pilot from Chichester, England, was one of six other astronauts selected from across Europe in 2009.

The first place aboard a Russian Soyuz for launch this spring went to an Italian astronaut and it was widely expected that Britain’s astronaut would have to wait until 2017 for a ride into space. 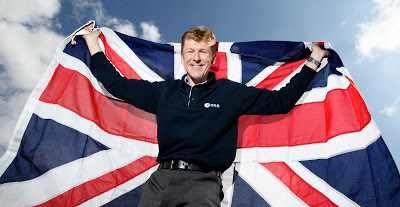 Two astronauts aboard the International Space Station (ISS) embark on an emergency spacewalk today to try to fix an ammonia leak in a cooling system on one of the Station's solar arrays.

The crew spotted a steady stream of small, white frozen ammonia flakes floating away from a coolant line outside the orbital outpost on Thursday.

Mission managers reviewed images and data gathered overnight and said yesterday that they planned to send American astronauts Chris Cassidy and Tom Marshburn out to try to seal the leak by replacing a pump on the cooling system.

"The crew is not in danger, and the Station continues to operate normally otherwise," a NASA spokesman said.

Ammonia is used to cool the power systems that operate the solar arrays, which provide electricity to the Space Station. Each of the eight solar arrays has its own independent cooling system.

The leak is on the far left side of the Station's truss structure, in an ammonia loop that astronauts previously tried to troubleshoot during a spacewalk last November.

While Cassidy and Marshburn are working outside the ISS, crew commander Chris Hadfield, a Canadian astronaut, will choreograph their movements from inside. Russian cosmonauts Pavel Vinogradov, Alexander Misurkin and Roman Romanenko make up the rest of the crew.

Work was undertaken to re-route the remaining power channels to maintain full operation of the systems normally controlled by the solar array that is cooled by the leaking loop.

After making their way 150 feet or so from the airlock to the far end of the P6 truss, Marshburn and Cassidy will visually inspect the area around the pump module to see if there are any obvious signs of micrometeoroid damage or any other problems.

On the assumption the leak is located is the 250-pound PFCS (Pump Flow Control Subassembly) box, Marshburn and Cassidy will install a replacement from one of three onboard spares. They also will carry out a detailed inspection of the bay where the pump is housed.

If the leak is still present after the pump module is replaced, engineers will have to go back to the drawing board to come up with a different solution.

Whatever the outcome, three of the station's six-man crew - Marshburn, Hadfield and cosmonaut Roman Romanenko - will undock as planned on Monday and return to Earth aboard a Russian Soyuz ferry craft to end their 146-day stay in space.

If an additional near-term spacewalk is needed to resolve the coolant leak, it would fall to Cassidy and Parmitano, who already are scheduled for previously-planned spacewalks on July 9 and 16.

The ISS is a £65 billion research laboratory that orbits 250 miles above Earth, and is jointly owned by the United States and Russia in partnership with Europe, Japan and Canada.
Posted by Clive Simpson at 10:15