Building for the future

A positive and infectious energy surrounds Karl Hick. He's a potent mix of athlete, scientist, accountant and developer. And the list of nine companies on his business card seemingly leaves no stone unturned.

With an award-winning home builder to head up, not to mention a timber frame firm, a healthcare and retirement homes specialist, an energy company, a waste company, a renewables firm, and two product supply companies, this is a man with an insatiable appetite for business.

He's been at the helm of the hugely successful Larkfleet Group for a dozen years now, running a growing portfolio of interconnected companies that are steadily setting new national benchmarks in home construction and renewable energy.

Larkfleet - based in Bourne, South Lincolnshire - specialises in building energy-efficient housing and investing in research and development of innovative new building designs, materials and construction methods.

The company is also a major developer of sustainable energy projects, as well as being a provider of energy-efficiency improvements for new and existing buildings.

"From the outset I wanted it to be a different company - built around a sustainability ethos," he says.

"At the time this was a unique proposition in the industry and others were not interested in such a long term approach."

Larkfleet was initially focused entirely on house building and but recognising the opportunity for diversification, the scope was quickly expanded to embrace developing more energy-efficient and sustainable homes, and renewable technologies.

"I can't put the world right but I can do my little bit to help the green industry and make it a commercial success," he says.

Larkfleet - one of the few builders to offer solar panels on new homes as standard - has now built more than 2,500 homes, developed some of the country's biggest solar energy parks and is exploring renewable technologies in waste and power.

Typical of the latter is a new research project to generate ‘carbon-free' electricity via an experimental solar power system installed on land at the Bourne headquarters. 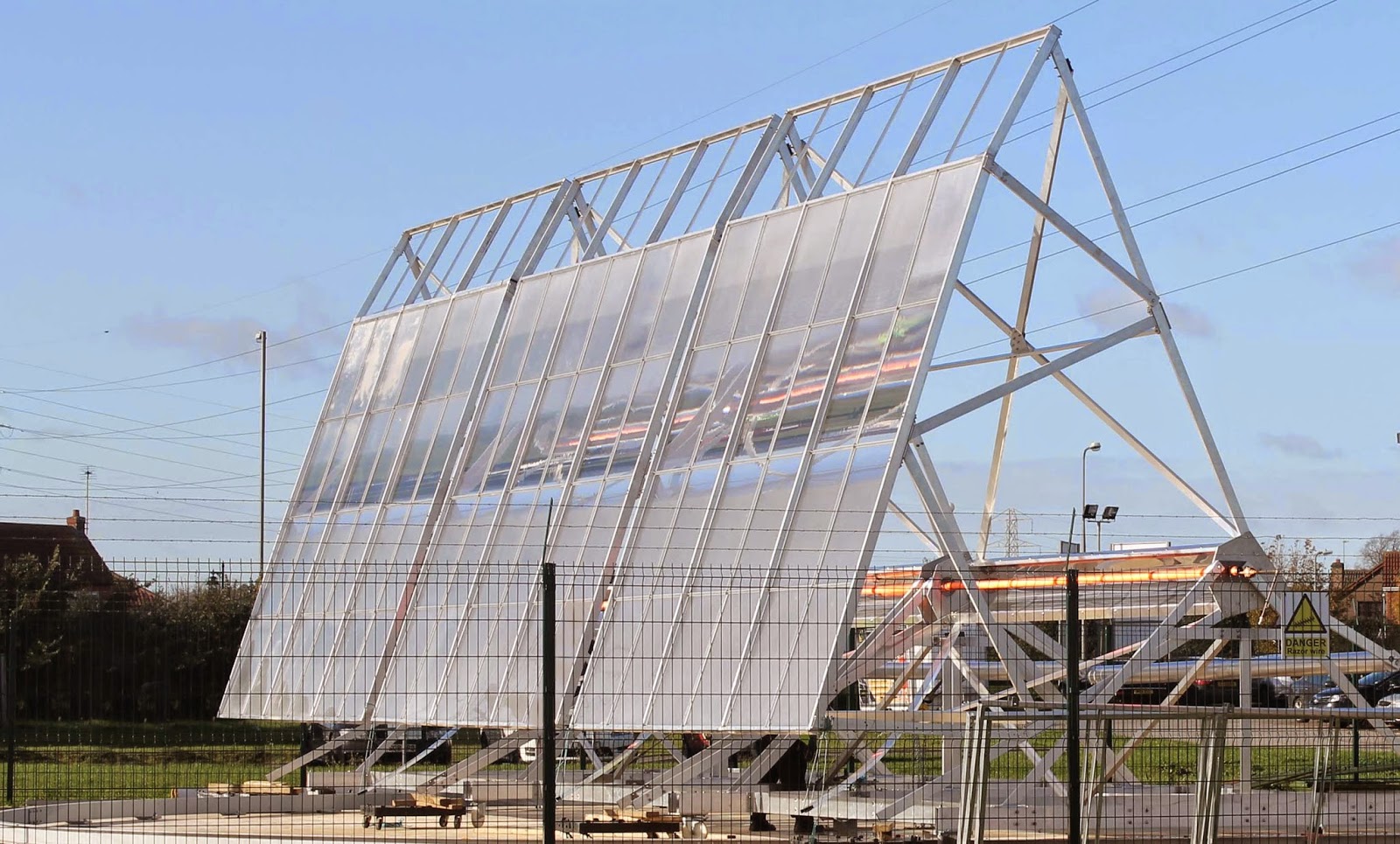 Its panels focus the sun's rays onto water-filled metal tubes and the energy generated can be harnessed to heat water or produce steam to drive a generator for electricity.

The panels are mounted on a rig which rotates to track the movement of the sun through the sky.

Karl hopes that such a system - which is attracting worldwide interest - can be integrated into traditional power stations.

"The solar steam could be fed to the power station generators so fossil fuel would only need to be burned at night or on days when solar power is not enough to meet demand," he says.

"This is very much a long-term project - we will trial the technology fully over the next couple of years before coming to any conclusions about its future potential."

The solar steam initiative is very much a product of his enquiring mind and science background.

In his younger days Karl was also an accomplished athlete and it is the competitive edge from his achievements on the track that he brings to the business world.

His pioneering spirit can also be seen behind the development of two prototype homes alongside the company offices - a Green Deal Eco House and a new PassiveHouse, a test home using new materials and construction methods.

The Green Deal Eco House demonstrates how buildings can incorporate both Green Deal and ECO-funded energy saving measures in housing and commercial buildings.

Larkfleet's PassiveHouse shows how lightweight pultruded glass-reinforced plastic (GRP) composite beams and panels could revolutionise the way in which future homes are built.

The house is designed to be ‘factory built' using mass-produced modular components that can easily installed on site with minimal labour and waste, all much quicker than a traditionally built house.

Its light weight also offers the potential for building such homes on foundations that would rise in response to flooding.

"The reason solar works so well in the UK is because you need a combination of sun and relatively cool temperatures for optimum energy output," explains Karl.

He describes it as a "very simple technology" but one that still needs government support in order to make it practical to deliver.

"We can do a lot more with solar energy generation in this country and it is something I think should be developed and supported more," he says.

"Wind should also be used more. People don't seem to want it but it is one of our biggest resources in the UK - the difference may come if the lights go out and then people will say ‘why didn't we invest in wind power'?"

Karl believes that if the subsidies given to the nation's nuclear power industry were matched for renewables the country would be in a very different situation.

"Thirty per cent of our energy could come from solar and it would be much cheaper, cleaner and simpler than nuclear," he says.

The scientist who became one of the country's most innovative developers has created a company of our time - a true leader when it comes to home building, sustainable development and renewable energy projects.

Failure is not an option


Many of the most successful people have experienced their fair share of failure before going on to do great things.And international businessman Mike Greene would count himself as one of them.

Born and raised on council estates, he worked hard to achieve a financially rewarding career after overcoming bankruptcy at the age of 27. Now, he’s a well-known business entrepreneur and angel investor, and a director of companies, trade associations, charities, marketing and retail organisations.

Mike greets me enthusiastically when I arrive at his family home in the heart of the South Lincolnshire Fens.As we chat whilst sitting at a large farmhouse table in the family’s garden conservatory on a fine summer’s afternoon it soon becomes evident that Peterborough’s very own Secret Millionaire is a man with a mission.

And, if there are any secrets when it comes to success in business and life, then here might be some answers.His appearance on Channel 4's Secret Millionaire programme in October 2011 was a life-transforming experience."It really consolidated my thinking about my past and its effect on what I have subsequently achieved," he says.

In the programme he became involved with various organisations working with underprivileged youngsters in Peterborough."It was a deeply moving experience and I was affected by how selfless some people can be in giving so much of their time and emotion to these causes."

But it was the kids themselves who proved the real eye-opener."Most of them had a really tough start in their lives and all of them had some real challenges to contend with. However, the ways in which they chose to deal with them were very different."

Afterwards Mike sold his main business and took a three month sabbatical during which he worked to raise £100,000 for a hundred charities in a hundred days.

The television programme and subsequent challenge inspired him to commit one-third of his time to helping charities and mentoring others to help change their lives for the better.

"We live in an instant world and too often we want a quick fix," he observes."The National Lottery and programmes like X-Factor lead a lot of people to believe that we can get rich quick without hard work - but life isn’t like that."

Mike’s own journey to fame and fortune stemmed from humble beginnings.His father abandoned the family when Mike was just a few years old, leading to eviction and living in an old people’s home before being re-housed in cramped, rented accommodation.

"It wasn’t until the family moved to Peterborough when I was 11 that I finally got a bed to myself and no longer had to share with my siblings," he says.

"Despite the tough early years I always swore that I would be a successful businessman. Even as a young boy I told my mother that one day I would be a millionaire. And I really believed it."

Today, Mike is living proof of his own mantra - ‘It's not where you start that matters, it's where you end up’.He’s a respected global retail consultant, an international speaker, a professional mentor, a philanthropist, an endurance adventurer, and a passionate charity fund raiser.

Above all he is a dedicated family man, with wife Julia and their two daughters, who were part of the motivation for writing his best selling and inspirational book Failure Breeds Success.

In a nutshell his book guides the reader through a series of steps to define what success means - in all its definitions - to them personally.

For Mike, life and business are inextricably connected. And whether its mentoring enthusiastic young entrepreneurs or speaking to groups of several hundred he doesn’t pull any punches."People spend more time planning their next holiday then they do the rest of the their life," he says.

Mike currently supports a number of charities in the Peterborough area, has around 20 investments in start up businesses and is on nine boards, five of which he chairs.

"I think I've got just about a perfect balance," he says. "It's about as close as I can get it to a third of my life being personal and family time, a third work and a third charity. I'm still a 16 hour a day person - but it's a really balanced 16 hours."

Largely because of his own life experiences, Mike still has something of a fascination with failure and turning the negative into something good.

"I have long harboured the notion that failure is not a bad thing. In fact, it is a very important part of our life journey," he says.

"Failure teaches you some of the most important lessons you will ever learn and if you are attuned to these lessons you will emerge a stronger, wiser and more resilient person - and be equipped with all the ingredients for success."

His ambition is to help others achieve their goals by sharing his stories and experiences through inspirational public speaking, and personal and professional mentoring.

It is evident from our conversation that Mike is a great believer in practising what he preaches. "You should live the life that you want to talk about and you should be the success that you advise on," he says.

We could have chatted for longer but I realised time was pressing and I now had my own goals to set and a strategy to plan. It was one of those inspirational interviews. And I left with what Mike likes to call his business card - a copy of his book Failure Breeds Success.


The above is adapted from ‘A clear vision’ - an article written by Clive Simpson for The Business Moment magazine. Mike Greene's book Failure Breeds Success is available from Amazon in paperback or Kindle
Posted by Clive Simpson at 14:43 No comments: