They do it with lenses 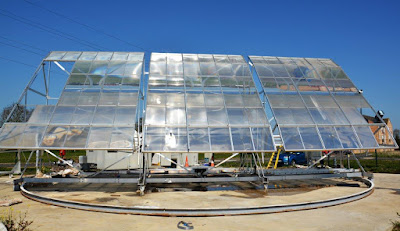 Hot and sunny days like the current mini-heatwave across the UK are just what are needed for the testing of a ground-breaking experimental solar power system which has the potential to generate carbon-free electricity in a new way.

The pioneering solar steam project is undergoing a series of tests this summer to further prove and develop the system as a potential alternative form of renewable technology.

Surrounded by protective fencing and with its own mini control centre, the test structure dominates the sky-line at the offices of sustainable development company the Larkfleet Group in the small market town of Bourne.

With the support of Cranfield University and its own modest R&D budget, the Larkfleet solar steam plant is believed to be the largest practical demonstration anywhere of a fresnel lens (as opposed to fresnel reflector) system for the concentration of solar power.

The futuristic construction is essentially a collection of giant lenses - manufactured in plastic to keep costs low - designed to concentrate the energy of sunlight onto metal piping and heat water to boiling point.

It measures just over 13 metres (42 feet) long by 5.5 metres (18 feet) high when extended to its maximum and the metal framework holds a series of lenses which concentrate refracted sunlight onto a 9 metre (30 feet) long metal pipe to heat water circulated inside. Full-size systems will be very much larger.

To maintain maximum power generation the lenses need to constantly track the sun in both azimuth and elevation - and so the rig needs to be automated.

"The principle is already proved and we are now looking at enhancing the tracking system to make it fully automatic," says Simone Perini (pictured below), a solar energy expert who joined Larkfleet's R&D team from Cranfield University last year. 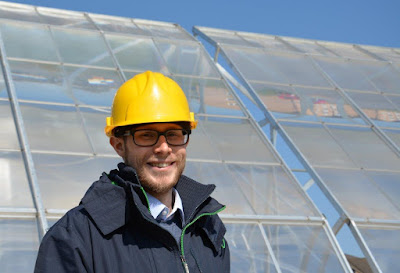 An automated dual-axis tracking system being developed as part of the project will concentrate solar irradiation with limited external input.

"Cost reductions and accurate tracking more than compensate for any loss of optical quality,” explains Perini. “Plastic lenses are less expensive to produce than vast arrays of glass mirrors now being used on comparable power generation systems throughout the world.

"It is challenging but a lot of work has been done already and it is an innovative project with great potential. For the same reason is very exciting."

Data will be gathered during a summer of testing before an evaluation phase leading to the next stage of development starts in September.

A quick search under solar steam on the internet does reveal a plethora of small scale amateur projects using a few lenses. “The difference here in Bourne is that we are running a full-scale demonstration R&D project,” says Perini. “I did find a similar plant being built in Japan but this was based on a point focus solar furnace so is quite different.”

As well as developing the system itself, Larkfleet is also assessing the potential market for such solar steam renewable technology.

One possibility is using it to generate electricity by driving a turbine - but it has many other potential uses so there are big incentives to make it as efficient as possible.

"We believe this is the sort of system that could be attractive to SMEs in the small scale solar market for any process heating system that requires heat of between 80 and 250 degrees," says Matthew Hicks, the group's renewables investment director.

"It would be extremely valuable in parts of the world where the sun is the only readily available source of energy and could be used to power desalination plants, refrigeration, sterilisation, chemical purification and numerous kinds of waste treatment," he added. 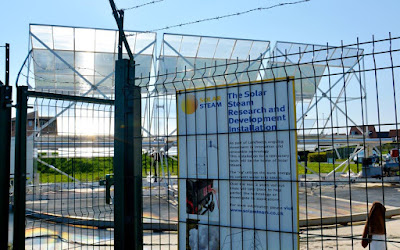 The system - already attracting interest from around the globe - might even be integrated into traditional power stations to reduce the burning of fossil fuels.

"The solar steam could be fed to the power station generators so gas or coal would only need to be burned at night or on days when solar power is not enough to meet demand," Hicks suggests.

"The solar steam rig provides an opportunity for looking into a new method of low carbon energy generation and is very much a long-term project - we will trial the technology fully before coming to any conclusions about its future potential."

Larkfleet Group is a privately-owned house building and development organisation with a strong record in creating high quality homes and communities.

It specialises in building energy-efficient housing and continually invests in research and the development of innovative new sustainable building designs, materials and construction methods.

It is also a major developer of sustainable energy projects and a provider of energy-efficiency improvements for new and existing buildings.

Posted by Clive Simpson at 15:13 No comments: