SIXTY years ago this month the Soviet Union’s Sputnik 1 became the first artificial satellite to orbit Earth and the world woke up to a new age - the Space Age.

This first satellite was a marker in human history and heralded a massive period of growth in science and technological development, much of it spurred by the subsequent six decades of space exploration.

In its broadest sense the whole sphere of space exploration, its inherent international cooperation and the expanding worldwide business of space has had a massively positive impact on the world.

Despite this, one wonders whether planet Earth has perhaps become a rather gloomy place of late - a world where vested interests often trump the wider common good, a world where optimism might be in short supply?

Like so many inventions and revolutions that have come of age and spawned a new breed of adventurers and entrepreneurs, there are also significant pitfalls and dangers on the road into deeper space.

The approach of Agricola, widely regarded as the originator of the experimental approach to science, is perhaps more sensible than either the blind faith of the pure optimist or the destructive cynicism of the pessimist.


His renaissance philosophy speaks to many of the challenges society still faces today because many of our most potent technologies - space included - are finely balanced between creation and destruction, between benefit and exploitation.

Whereas sometimes a mechanism might be needed to tip the balance towards good, Agricola’s philosophy also reminds us of the need for wise leadership whether in politics, business, science or technology.

In Earth orbit, for example, we continue to exploit the opportunities provided by satellites for communications, navigation, TV broadcasting, observation and research, whilst at the same time creating a serious debris problem.

Space exploration is inextricably linked to the great reach of human progress and, if our further expansion beyond Earth is not to stall, the considered words of a scientist such as Agricola might just provide guidance enough for our future custody of the space realm.

We might also be wise to heed the solemn and inherent warning in a Buddhist proverb which tells us that,‘to every man is given the key to the gates of heaven, the same key also opens the gates of hell.’


In the days following the first Sputnik our vision of the future was perhaps more constrained. Today we find ourselves on the threshold of an unimagined space tourism era, eagerly anticipating the first crewed flights to Mars and perhaps even human colonies on the red planet.

At the same time zealous entrepreneurs, and even whole countries, are eyeing the untold mineral wealth of asteroids and the opportunity of a new mining ‘gold rush’ for which the old ways will not suffice.

Neatly juxtaposed with the Sputnik anniversary is the first birthday of Asgardia, the world’s first ‘space nation’ which is also about to mark its presence in orbit with the launch of its
inaugural satellite.

In all of these ventures judicious leadership and governance are vitally important. By the same token, we are all part of the whole and hold individual keys to our own destinies. And, as we recall the anniversary of the first Earth orbiting satellite, it means we can all be part of the future in whichever way we choose.

This article was first published as the Editorial to the Autumn 2017 edition of ROOM - The Space Journal for which Clive Simpson is the Managing Editor.
Posted by Clive Simpson at 12:53 No comments:

Bright lights in the sky

THERE'S been significant worldwide media interest in tomorrow morning’s flyby of asteroid 2012 TC4, which will make an unusually close pass to Earth at a distance of just 43,780 km -  that’s well inside the orbit of the Moon and closer than some satellites.

"We know the orbit of TC4 well enough to be absolutely certain that it won't hit Earth," assures Paul Chodas, manager of the Center for Near-Earth Object Studies (CNEOS) at NASA’s Jet Propulsion Laboratory in California,"but we haven't established its exact path just yet."

The chunk of space rock is about as big (in the range of 10-20 m diameter) as the famous 2013 Chelyabinsk object which hit Earth without warning as the sun  rose over Russia’s Ural mountains on 15 February 2013.

As the space rock skimmed into the atmosphere the early morning sky lit up with a second ‘sun’ as shock waves shattered windows in hundreds of buildings around the wakening city.

It had impacted Earth literally ‘out of the blue’, flying in from the direction of the sun where no telescope could see it - and it took everyone by surprise.

Years later, meteorite hunters are still finding pieces of the ‘Chelyabinsk asteroid’ that rained down after its 17 m-wide body disintegrated in the atmosphere.

The flyby is so close, gravity will significantly alter the asteroid's trajectory before it exits the Earth-Moon system.

To get a better handle on the asteroid's orbit (and possible future encounters), an international network of telescopes will monitor 2012 TC4 as it speeds by. 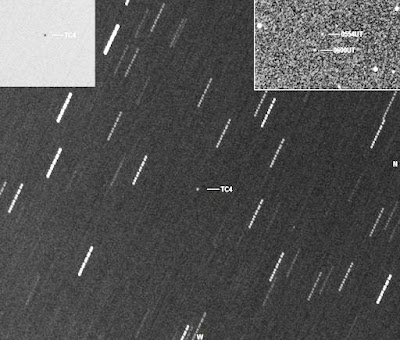 Pinging the asteroid with its Goldstone telescope, NASA also hopes to learn much about the space rock's physical properties.

This asteroid is too small to see with the naked eye. However, skilled amateur astronomers using small telescopes will be able to observe it. At peak brightness, 2012 TC4 will shine like a 13th magnitude star as it zips through the constellations Capricornus and Sagittarius.

The house-sized space rock does afford space agencies across the globe an opportunity to test some of their planetary defence scenarios that might be needed if Earth was in the path of a more dangerous asteroid.

If an asteroid the size of TC4 or slightly bigger was on course to hit a populated area, agencies such as the ESA and NASA would look to warn people and work with relevant governments to potentially start an evacuation.

If anything signifcantly bigger the TC4 is ever detected, much more drastic action might be needed, including the possibility of trying to deflect any such asteroid before it collides with Earth.