New kids on the block

Just a stone’s throw from the attractive main entrance of Norwich railway station - the northern terminus of the Great Eastern Mainline from London Liverpool Street - flows the River Wensom, a chalk-fed Norfolk river and a tributary of the River Yare that bends serenely through Norfolk’s county town. 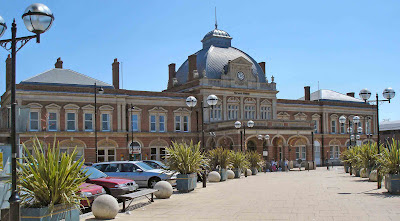 A good choice after alighting at the station, opened in 1884 and now the only remaining of three railway stations in Norwich, is to head across the road bridge and then turn alongside the water for a pleasant riverside walk down towards the Cathedral.

The gentle stroll on a sunny spring afternoon soon brings you to the tree-lined edge of playing fields at a point called Pull’s Ferry.

Here you can continue the riverside saunter around the outskirts of the city or turn to wander down the timeless and immaculately maintained Ferry Lane - itself a former canal - towards Norwich Cathedral Close.

The close is one of the largest in England, extending over 44 acres and containing a mixture of delightful residential and commercial properties.

Pull’s Ferry, the former ‘water gate’ to the close, and the Ferry Lane canal were originally used as the final leg of transportation for the distinctive Caen stone from which most of the cathedral was constructed.

The nearby properties range from stately eighteenth and nineteenth century terraces to homes and buildings with more distinctive Dutch gables.

Just along the way, the close houses the entrance to the cathedral herb garden - splendidly attractive and fragrant, particularly in the summer but worth a visit at any time of the year.

From this part of the close the cathedral spire is impressive, dominating the view and forever drawing the eye to gaze upon its structure. 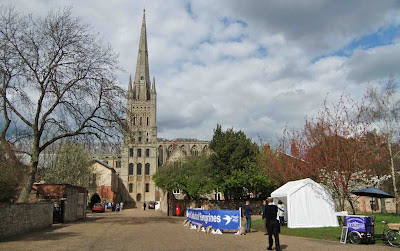 On this day we were fortunate enough to arrive at the edge of the green and stumble upon a small tent-like structure along with an array of spotting scopes all trained on the cathedral spire.

High above us, the Hawk and Owl Trust had created a nesting platform, strapped to the side of the spire and now adopted as a perfect site from which to raise a young family by a pair of Peregrine falcons. 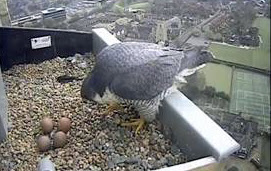 At the time there were four eggs on the stony bedding being incubated by a patient and expectant mum and dad. It was a treat to be there just as mother, after a four hour stint on the nest, decided to stretch her wings and take flight to survey the scene 240 feet below.

The first peregrine egg hatched in the early hours on 2 May, the second egg hatched towards the end of the day and the third hatched two days later.

The peregrine chicks continue to do well and their progress can be followed live online via a webcam set up to overlook the nesting platform - Norwich peregrines.

Peregrine falcons were once endangered in the UK but thanks to conservation efforts like this one their numbers have recovered in recent years.

The peregrine’s powerful body, short tail and pointed wings give it a distinctive appearance. This is the fastest falcon in flight, capable of reaching more than 120 mph when swooping on its pray.

They have entranced generations with the beauty of their songs and glimpses of their plumage - but now the sound of the linnet and the vision of a turtle dove are becoming increasingly rare experiences for visitors to the European countryside.

According to a recent survey, the chances of encountering any one of the 36 species of farmland birds in Europe – species that also include the lapwing, the skylark and the meadow pipit – are now stunningly low.

Devastating declines in their numbers have seen overall populations drop from 600 million to 300 million between 1980 and 2009, the study has discovered.

This dramatic decline represents a 50 percent reduction and is blamed on major changes in farming policies enforced by the EU over the last 30 years.

In order to boost food production across Europe, the wholesale ripping up of hedgerows, draining of wetlands and ploughing over of meadows has robbed farmland birds of their homes and food. Numbers of linnets, turtle doves and lapwings have crashed as a result.

The survey, carried out by the pan-European Common Bird Monitoring Scheme, also found that Britain has been one of the nations worst affected by losses to its farmland bird populations - in Europe the population of grey partridges has dropped from 13.4 million to 2.4 million, a loss of 82 percent whereas in the UK, that loss was 91 percent.

These losses were described as shocking by the scheme's chairman, Richard Gregory. "We had got used to noting a loss of a few per cent in numbers of various species over one or two years," he said.

"It was only when we added up numbers of all the different farmland bird species for each year since 1980, when we started keeping records, that we found their overall population has dropped from 600 million to 300 million, which is a calamitous loss. We have been sleepwalking into a disaster."

According to Gregory, who also serves as the head of species monitoring for the UK's Royal Society for the Preservation of Birds (RSPB), a range of factors are involved. In the case of the grey partridge, he blamed the intensification of farming which had killed off the plentiful numbers of insects that they ate.

With starlings, whose populations have fallen from 84.9 million to 39.9 million, a drop of 53 percent, it has been the destruction of woodlands and the corresponding loss of nesting places that has done the most serious damage, he said.

"By contrast, lapwings – whose numbers have declined from 3.8 million to 1.8 million, a drop of 52 precent – are more associated with marshes and riverbanks. It has been the draining of these lands that has destroyed their habitats and reduced their numbers so drastically."

The fact that the high losses of linnets, turtle doves and other farmland birds had not been expected is blamed by Gregory on a phenomenon known as the shifting baseline syndrome.

And it is unlikely that the problem will get better in the near future. In Bulgaria, Poland and the EU's other, newer member nations in eastern Europe, the farming policies that have been responsible for wiping out vast numbers of farmland birds in older member countries are only being introduced now.

"We take for granted things that two generations ago would have seemed inconceivable – in this case the reduction by 300 million of Europe's farmland bird population," Gregory added.

"Apart from the removal of creatures that are beautiful to behold and beautiful to listen to, we should take note of what this means. These losses are telling us that something is seriously amiss in the world around us and the way that we are interacting with nature."

The discovery of the dramatic losses suffered by farmland birds since 1980 comes as the green movement prepares to celebrate the 50th anniversary of the publication of Rachel Carson's Silent Spring.

The book, published in summer 1962, outlined the devastating impact that the uncontrolled use of synthetic insecticides was having on populations of birds in the US and played a critical role in kick-starting the green movement on both sides of the Atlantic.

Humanity was beginning to have a dreadful impact on wildlife and in particular on birds, Carson argued and Silent Spring led directly to the banning of the manufacture of DDT and other pesticides.

However, the bird losses she outlined 50 years ago have been dwarfed by the losses that have occurred in the last 30 years and which are revealed in the RSPB survey. Carson would be horrified about the state of the planet today.

SpaceX is due to begin regular cargo flights to the International Space Station at the end of the summer - and its Dragon spacecraft will be the only craft on the lab's roster of servicing vehicles able to return significant hardware to Earth.

Formal reviews this month after a flawless nine day test flight in May are expected to clear the way for SpaceX's first operational cargo mission sometime in September.

SpaceX's commercial Dragon spaceship made an automated pinpoint splashdown in the Pacific Ocean, completing a feat never before achieved by private industry. 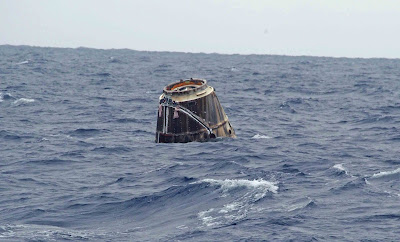 The gumdrop-shaped capsule, blackened by the heat of a high-speed re-entry, splashed down in the Pacific Ocean about 560 miles west of Baja, California, at 1542 GMT.

The Dragon spacecraft became the first privately-owned vehicle to fly to the Space Station, notching that triumph May 25 at the end of a cautious laser-guided approach to the complex.

The capsule also became the first US spacecraft to reach the Space Station since the last Space Shuttle flight departed in July 2011.

With splashdown on 31 May, Dragon proved it could fill a void left after the Shuttle's retirement in returning experiment samples, broken components and other excess hardware to Earth.

The Dragon test flight launched from Florida on May 22 aboard a Falcon 9 rocket. Three days later, after a flyby to demonstrate rendezvous techniques, the spacecraft precisely flew within 30 feet of the Station, close enough for the crew inside the complex to grapple Dragon with a robotic arm. 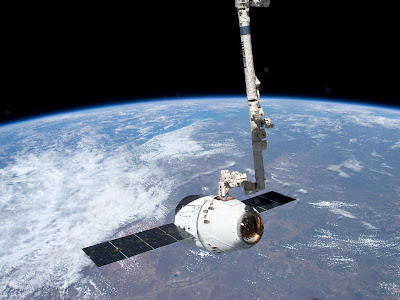 The astronauts unloaded more than 1,000 pounds of cargo from Dragon's pressurised compartment, including food, clothing, student experiments, and computer gear. The crew installed more than 1,300 pounds of equipment back inside Dragon for return to Earth.

After six days attached to the complex, Dragon was released from the lab's robotic arm at 0935.

SpaceX flight controllers at the company's headquarters in Hawthorne, Calif., commanded the ship's thrusters to five for nearly 10 minutes a few hours later. The thrust slowed Dragon's speed by more than 200 mph, enough for its orbit to drop into the atmosphere for re-entry.

The successful conclusion of the test flight capped a triumphant mission for SpaceX, which intends to outfit the Dragon spacecraft for crewed launches and landings within three or four years. SpaceX is competing for funding from NASA to finance the effort.