The Lighthouse Keeper, his beautiful wife and loveable dog don’t actually live in a lighthouse. They reside in a more conventional ‘box’ with a nice garden in the middle of the Fens, the flatlands of eastern England.

It’s a seascape of kinds but there’s no view of the sea from here, just big open skies. As the local crow flies, however, it is only some 10-15 miles to the muddy Wash, the largest estuary system in Britain.

If vast swaths of the Fens — land mostly at or just above sea level — become flooded as sea levels rise through climate change in the future the sea view could one day come to us.

But to other matters. Let me introduce our dog, a cute Italian Greyhound called Rosie, or various derivatives of the name according to mood, including ‘Rosebud’,‘Buddy’, ‘RD’ and other affectionate unmentionables. She was 14 last week, so is an old lady now. Generally healthy and enjoying the occasional walk but with failing eyesight due to cataracts. 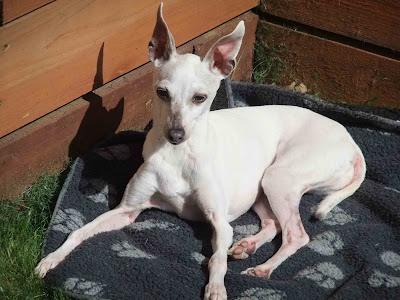 For those of you not familiar with this breed, or never having met an ‘Iggy’, they are the coolest member of the sight hound family but weigh in at a rather diddy size. A bit dropped off your regular racing monster and generally about half the size of a Whippet. But in every other respect they look and behave in the same laid back way.

Not sure that RD would appreciate living alongside or beneath a giant flashing light but if we ever did transfer to a real lighthouse then a candidate might be this one. 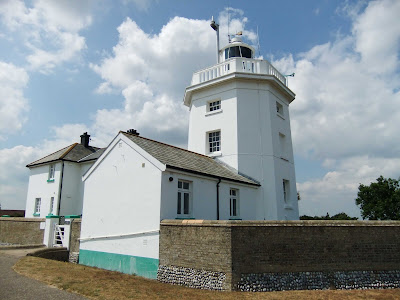 This warning outpost is located on the sandy cliffs above the traditional seaside town of Cromer on the North Norfolk coast so it is not exactly remote in terms of lighthouse locations.

Cromer, and its surrounding countryside and beaches, are a long-time favourite haunt for family holidays and weekends away. It lies some 25 miles north east of historic Norwich and much of its charm is that - apart from the necessary trappings of modern life - little has changed since its Victorian heyday. 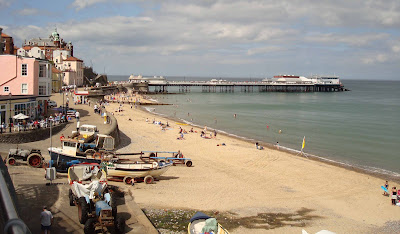 A welcome addition about four years ago to Cromer’s growing café and restaurant society was ‘The Rocket House’, just down from the town’s iconic pier which still boasts a theatre for summer shows and a lifeboat station on the end.

The Rocket House is so-called because the café, with the Henry Blogg lifeboat museum below, is built on a site that was used during the Second World War to fire warning rockets out over the North Sea. 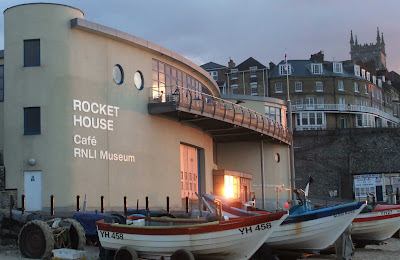 The food is always great, the coffee the best in Cromer, and the staff friendly. The view across the beach and sea through porthole windows or from the outside balcony is enthralling whatever the weather.

And with a word like ‘rocket’ in its name where could be more appropriate for the Lighthouse Keeper and his wife to repose on a sunny Norfolk afternoon? 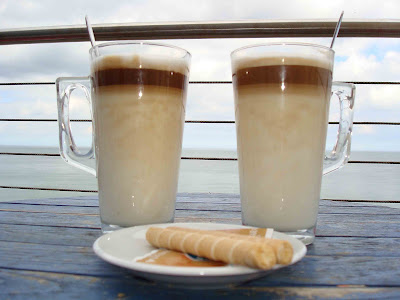 Posted by Clive Simpson at 11:44 No comments:

It was the kind of opportunity that dreams are made of. Not only was Paolo Nespoli working in space as an astronaut but he was about to get the once-in-a-lifetime chance that us Earth-bound photographers can only dream of.

First the comparisons. Paolo and I both grew up in the 1960s harbouring dreams that we might one day fly in space. And we both got keen on photography from an early age too.

I went on to write about space, interviewing guys like Nespoli and editing a magazine called Spaceflight. He joined the Italian Air Force and became one of ESA’s astronauts, flying to the Space Station in 2007 and then again at the end of 2010, this time for a six month stay.

Both of us continue on our photographic quest - me from down here and Paolo from his temporary home 200 miles high. During his recent, and probably last, trip into orbit he enthusiastically photographed his view of Earth, downloading an impressive 667 images and capturing many more stunning views.

But on his way home, just after his Soyuz TMA-20 spacecraft undocked from the International Space Station at the end of May, Paolo had one final very special job to do - capture unique images of the orbiting outpost with both the Shuttle and Europe’s ATV ferry attached. His spacecraft stopped about 200 metres away and the Station tilted to present a better view.

Paolo took his photos through a small window in the Soyuz orbital module before returning to his seat in the descent module alongside crewmates Dmitri Kondratyev and Catherine Coleman for the landing.

"This was a complex and delicate manoeuvre that could have caused serious problems if not executed properly, but I felt it was worth the risk," says Paolo, who had only few seconds to admire the view for himself.

"Taking these pictures was not as straightforward as aiming the camera and shooting," he explained.

"When we undocked, we were already strapped in our seats wearing spacesuits. Our suits and the three hatches between the landing and orbital modules were leak-checked and normally after undocking the seals are not broken any more because retesting them costs oxygen – and there is not so much of it onboard."

The problem for Paolo was that the tiny window where the pictures needed to be taken was in the orbital module – already then partly depressurised. 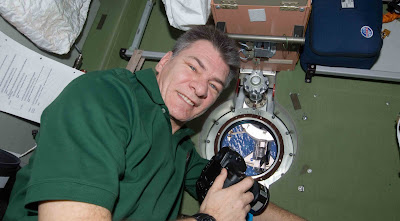 He had to remove his gloves, unstrap from his seat, float to the hatch, repressurise the forward module and open the hatch.

"I had to slide over Dmitry, paying attention not to hit the manual controls, and go up to the orbital module where I had prepared the cameras before hatch closure," he said.

Paolo recorded stills and video, alternating them while paying attention to the composition. "The position of the Earth, the reflections on the glass of the window - and I had to make sure that the lens was in the centre of the window.

"I really prayed that these would be good, since I was conscious of their value. But what was done was done – and I quickly forgot them when I had to concentrate on redoing the hatch and suit leak checks, and pick up the reentry and landing procedures."

It was not until a number of days after landing when his precious camera cards were retrieved from the capsule that his incredible photos of an orbiting Space Station and Space Shuttle could be viewed. 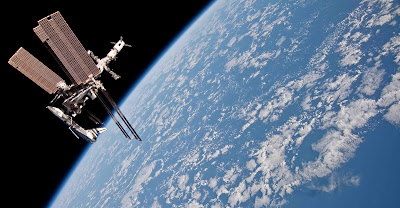 He described taking the historic photos as an honour. "Since I was a kid, photography has been a hobby dear to me and all through my life its has brought me to unusual places and made me live unexpected experiences," he said. 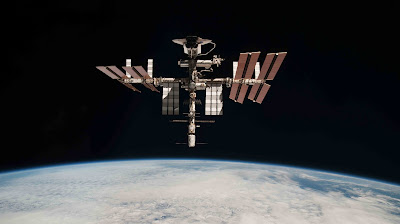 "Like a photographer who has a gorgeous model in front of him, I was more concentrating on getting a good technical and artistic product than admiring it.

"I saw the view when changing from still to video images, but I purposely limited looking because I know I would have been mesmerised by the beauty of it." 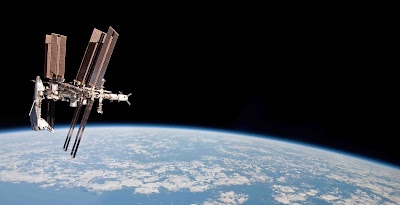 Posted by Clive Simpson at 11:17 No comments:

And then there was one...

The Space Shuttle Endeavour slipped back to Earth this morning under cover of darkness. And just as it made a perfect touchdown at Kennedy Space Center, its elder sister Atlantis was arriving at launch pad 39A a few miles away.

Endeavour has now safely completed her spaceflight career that covered 25 voyages to Earth orbit over 19 years, spanning 122,883,151 miles travelled, 4,677 revolutions of the planet and 299 days aloft.

In reality, STS-134 was the final mission to the International Space Station of any real substance. Barring emergencies on this summer’s Atlantis flight there will be no more spacewalks by Shuttle astronauts or major payloads carried into orbit. 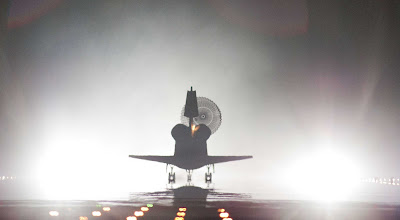 The eerie night-time landing of NASA’s youngest orbiter brought out the emotions even more than Discovery’s final flight a few months earlier.

Now the reality hits home - there is just one more flight ever in the 30 year history of the Space Shuttle programme.

A few hours before a sonic boom heralded Endeavour’s arrival in the dark skies above KSC, the Space Shuttle Atlantis emerged from the Vehicle Assembly Building (VAB) to a cheering crowd and a barrage of camera flashes for its final journey to a launch pad.

The Florida sun was setting and this was the last time any Shuttle was scheduled to make the slow 3.5 mile trek from the VAB in preparation for its currently planned launch on 8 July. 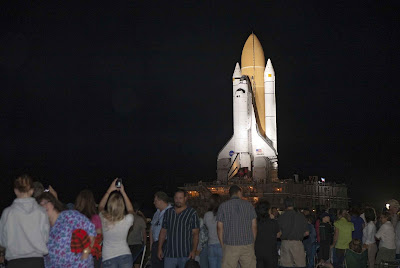 Patriotic music blared from speakers as powerful xenon floodlights ushered the vehicle through the crowd, which was estimated to be as large as 8,400. Among those in attendance were the four astronauts who will make up the final Shuttle crew.

Workers and their guests were also invited to witness the historic rollout as part of a NASA morale programme to thank employees for their years of service before many of them loose their jobs.

"In my opinion this is the most graceful, beautiful vehicle we've had to fly in space ever," said astronaut Rex Walheim. "It's going to be a long time until you see a vehicle roll to the pad that looks as beautiful as that. How can you beat that - an airplane sitting on the side of a rocket? It's absolutely stunning."

As America looks to more commercial solutions for launching its citizens into space in the future it seems certain that something of the romance of space travel will be lost along with the retirement of the Space Shuttle. 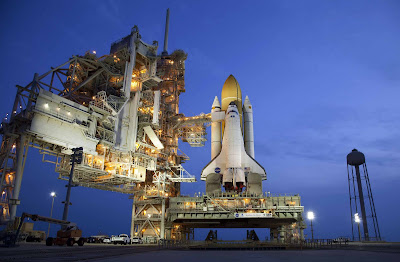 Posted by Clive Simpson at 16:12 No comments: