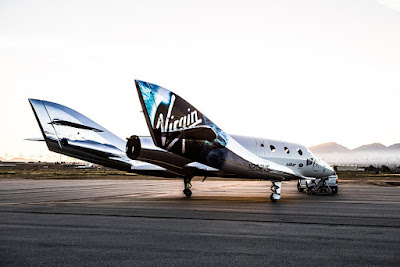 I’m just about to book an online rail ticket for a trip into London from Peterborough next week on Virgin’s East Coast mainline service. It’s a fast, 50 minute journey and a flexible day return ticket, including London Underground, is £110.

On the other side of the world another member of the Virgin group - Virgin Galactic - has just unveiled its newly built spaceship, VSS Unity, in a ceremony at the company’s factory in Mojave, California.

Future tourist trips into near-Earth space - with five minutes of weightlessness - will probably take about the same time as my journey to London.

The big difference will be the price. Currently Virgin Galactic is selling advance tickets at £175,000, though it does suggest this is likely to reduce once things get properly underway.

Would I be interested in a return trip into sub-orbital space costing tens of thousands of pounds. Given the resources, of course, I would!

This will be the first time that ordinary people without any training will be able to view the curvature of Earth against the blackness of space, floating like an astronaut, and seeing our fragile atmosphere which is as thin as an eggshell. 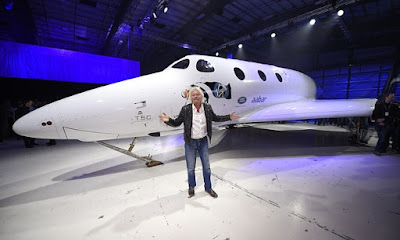 “It’s almost too good to be true, isn’t it?” said Sir Richard Branson, the founder of Virgin group, after the gleaming white and silver spacecraft was wheeled into the centre of the cavernous hangar.

“I’ve always believed that having the best-looking planes and trains in the world, while not a guarantee, is a good place to start,” he joked. “Isn’t she beautiful?”

More than 700 people have already signed up to fly on Virgin Galactic’s trips into space, which will be launched from SpacePort America, New Mexico, but could one day even fly from the UK.

The development and testing for the vehicle, however, has all taken place in Mojave, at the same airfield where Chuck Yeager became the first human being to break the sound barrier in his Bell X1.

The day’s jubilant tone was tinged with poignancy as Virgin Galactic’s CEO, George Whitesides, recalled meeting with Branson in November 2014 on the day of the crash.

After a nine-month investigation, the National Transportation Safety Board ruled to be pilot error, the result of unlocking the ‘feathering’ system – designed to slow the craft down during re-entry – too early in the flight.

Virgin Galactic remains cagey about announcing an expected timeline for a first flight public – saying it wants to give the safety testing as much time as necessary. Two years would seem a good estimate.

Unity will be tested as a whole craft, first on the ground then in tethered flight to the carrying aircraft, then in controlled glide, and then finally in powered flight.

Branson admitted to reporters before the ceremony began that it was “pretty cool to be taking people into space” but said that the technology developed for space tourism would, he believed, one day also prove useful for edge-of-space high-speed intercontinental travel.
Posted by Clive Simpson at 11:56 No comments:

Gagarin and his hat 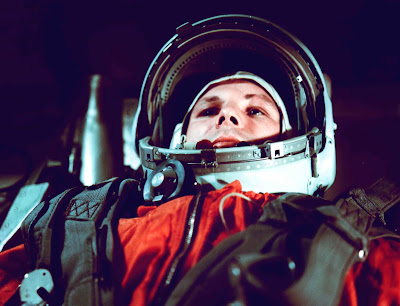 My career as a journalist has presented many wonderful opportunities to interview people from all walks of life, not to mention a considerable number of pioneering spacemen and women.

Yuri Gagarin, the first human to orbit Earth, was of course before my time. He died tragically in 1968, just as America was preparing to send its first citizens to the Moon and I was still learning my ABCs.

Not to be thwarted by this slight mis-match in time, I decided to catch up with Mr Gagarin somewhat retrospectively.

Soon after his record-breaking flight he arrived in London as part of his post-mission world tour, a trip that the British government of the day initially wanted to keep low key.

In the end his popularity meant it was quickly transformed into a fully-fledged State visit and he returned to the capital following a fleeting diversion to Manchester at the behest of  the Union of Foundry Workers.

On a sunny July morning in 1961 our hero arrived in London for the second time and, during a stroll beside the Thames, it happened that nature called, as it implicitly does when Royalty and things of State are suddenly on your meeting agenda.

So it was as Mr Gagarin surreptitiously slipped his minder and popped into the Gents near the Tower of London for a quick brush-up that our time-travelling paths coincided - and opportunity knocked.

As we shared a handbasin and a leaky tap I was tempted to do the British thing and ask him what the weather was like in Moscow. But I just couldn’t take my eyes off his big hat.

And this is how my spontaneous interview with Mr Yuri Gagarin, Hero of the Soviet Union, Russian space pilot and all round good guy, came about. 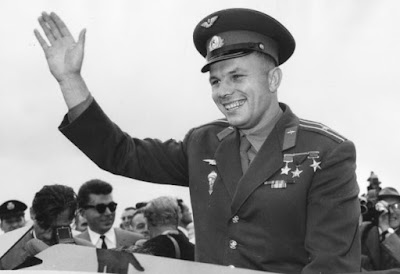 At this point thanks are due  to my friend, fellow writer and map expert Brian Nicholls who had the presence of mind to capture the moment and kindly provided the following transcript of my bumbling interview, reproduced below in ‘print’ for the first time.

Clive: We have seen that iconic picture of you stepping off the plane at Heathrow. But tell me. Your officer’s hat - it does seem a little big. Is it where you keep your sandwiches?

Yuri: In our beloved homeland, Russia, we don’t use this expression ‘the biggest thing since sliced bread’. In fact, we don’t even know what sliced bread is! However, we have heard of the Earl of Sandwich. But you’re right, our biggest thing is our hats. All officers wear them. As for where we keep our sandwiches - well, I have been invited to Lyons corner shop and the Ritz - so maybe I could take some and put them under my hat. Ha! Under my hat! Get it?

Clive: Talking of headgear. I have also seen that rather jerky, rather shaky film of you staring out under your helmet. You certainly seemed to be bouncing around a bit. Is there any reason for that?

Yuri: In orbit it is particularly, as you say, ‘crammed’ with instrumentation. But it does not help if the engineer did not release the previous occupant, namely the dog. It was nothing to do with the speed, or the camera - it was me sitting on the damn dog. They should have taken it out first!

Clive: I see. Tell me about you being a hero in Russia. Do you get any privileges?

Yuri: In your country you get, I believe, Green Shield Stamps. Da?

Clive: And loyalty cards like Nectar, Virgin Atlantic Flying Club and, of course, The Co-operative.

Yuri: Ah yes. But I got... nothing. Absolutely nothing. No stamps, no vouchers... nothing for my amazing space trip. They said I never did enough orbits so now they are sending me round the world by our national propeller driven planes so I can get some stamps. Then I can cash in and get an iron for my wife who has been asking where I have been. Wives. They are the limit aren’t they?

By now he was crumpling a damp green paper towel and looking for the bin. I took my cue.

Clive: At this point, Yuri, I have to say thank you for talking to me. It has been a privilege. Do svidaniya.