Essential indicators of Earth’s changing climate continue to reflect trends of a warming planet, with several markers such as rising land and ocean temperature, sea levels and greenhouse gases all setting new records in 2014.

The findings are included in the US National Oceanic and Atmospheric Administration's (NOAA) 'State of the Climate in 2014' report published this week.

NOAA warns cities and businesses to expect ever higher levels of coastal flood risk after sea levels hit record highs. The agency confirmed that average sea levels have risen by 3.2 mm every year since 1993 - meaning that in 2014 sea levels were about 67 mm higher than in 1993.

The report, which is compiled annually by US government climate scientists, also revealed land and sea temperatures reaching record highs in 2014, while atmospheric levels of greenhouse gases also soared.

Ocean temperatures are at their warmest since records began 135 years ago, the report says. The record warming is contributing to sea level rise - helping to melt glaciers more quickly and causing ocean expansion (water slowly expands as it warms).

Greg Johnson, an oceanographer at NOAA's Pacific Marine Environmental Laboratory, suggested thinking of the warming effect as if it were a fly wheel or freight train.

"It takes a big push to get it going but it is moving now and will continue to move long after we continue to stop pushing it," he explained. 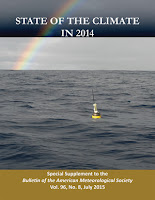 The report also noted that warmer ocean temperatures raise the risk of severe storms, which are made more dangerous by high ocean levels. Warm ocean temperatures in the Pacific are also producing warmer winters and worsening drought conditions on the US West Coast, scientists said.

The news came on the same day as a new joint report was released by the Rockefeller Foundation and the Lancet Commission, revealing that climate change is jeopardizing the future health of the human population.

Braulio Ferreira De Souza Dias, scientific advisor for the Lancet Commission, said: “We are moving closer than ever before to triggering potentially irreversible impacts, and jeopardizing the health of our ecosystems and that of present and future generations.”

It also comes in the same week as a major report argued that we should prepare for climate change in the same way as we would a nuclear war or terrorist attack - by planning for the worst-case scenario.

Even a small increase in sea level can cause a large increase in the risk of flooding. A global sea level rise of just one metre - the most we are likely to see this century, according to the report's lead author Sir David King - turns what would have been a one-in-a-hundred year flood in New York into a twice a year catastrophe.

Logo goes up in smoke 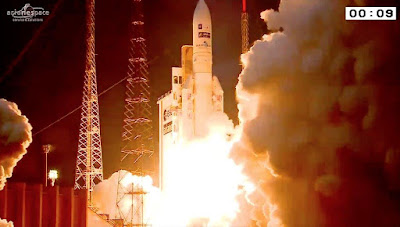 It was especially good to see the giant MSG-4 logo on the side of the Ariane rocket because the logo was designed for EUMETSAT by myself and Andrew Hunt back in 2002. 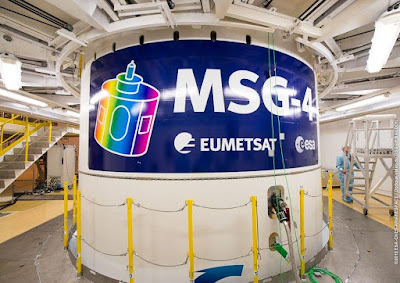 At the time I ran the award-winning media agency SimComm Europe, which was based in Havant near Portsmouth, and Andy freelanced for us. 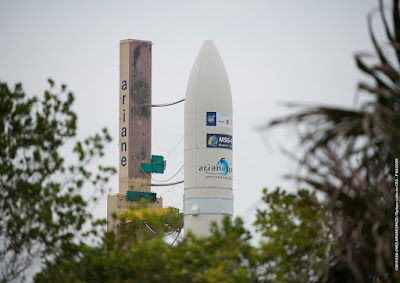 I worked extensively for both EUMETSAT, based in Darmstadt, Germany, and for the media and public outreach departments of ESA's Paris headquarters and Netherlands technology base, writing and producing annual reports, newsletters, website copy, press releases and brochures. 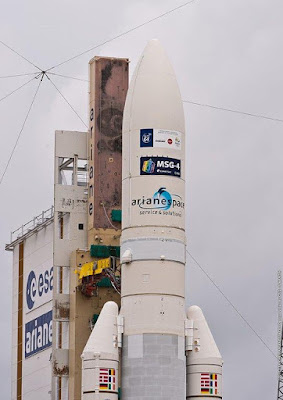 For our humble MSG logo this last night’s launch was its fourth and final flight into space on the side of an Ariane 5 rocket. This was the press release we issued back on 22 August 2002:

The design work of a Havant company will quite literally be going into orbit shortly before midnight tonight.

A giant logo created by SimComm Europe is on the side of Europe's Ariane 5 rocket which is due to blast a new European weather satellite into space.

The launch of the first Meteosat Second Generation satellite for Europe's German-based Eumetsat weather organisation is scheduled for 2330 BST from French Guiana in South America.

SimComm, based in Brockhampton Lane, has been working with Eumetsat for a number of years and designed the logo for use in various kinds of publicity material connected with the launch.

"The logo has been used in many documents and on stickers, pens and notebooks," said SimComm managing director Clive Simpson.

"However, we're delighted to see  our work on the side of a rocket - it's quite a coup for a PR and design agency, and not every day you get such prestigious exposure."

Meteosat Second Generation will replace the current series of weather satellites which provide the pictures and information for our daily weather forecasts.

The 80-page full colour document, in both English and French versions, promoted the value of the Meteosat Second Generation programme.

SimComm writer Lucy Owens (now Mrs Lucy Kemp), who also acted as deputy editor for myself on Spaceflight magazine, went on a press trip to French Guiana for the first MSG launch.

Unfortunately, as is so often the case with launches, her trek to South America proved in vain as far as witnessing a spectacular launch was concerned after a technical fault delayed it beyond the scheduled length of the press trip.

Posted by Clive Simpson at 17:37 No comments: