Britain must ensure that its world class scientific research is not harmed as a result of the country's referendum decision to leave the EU, the astronaut Tim Peake has said.

Speaking ahead of his visit to the Farnborough International Air Show, the former helicopter test pilot, who returned from a six-month mission to the International Space Station (ISS) in June, described the referendum result as “a surprising decision for everybody”.

But he added that it was important for the country to reunite and get on with securing the best future for Britain.

“Though I missed a lot of the campaigning I’m aware now it caused divisiveness and some of it was not done in the most positive fashion,” he told The Guardian newspaper. “We have to put that behind us now and work on unity and moving forwards.”

Peake said the protection of UK scientific research was a priority in the negotiations that lie ahead.

“We have to make sure we don’t harm ourselves in areas where the EU was particularly good for us. I don’t want to see scientists being punished, and this having negative effects on our science. These are important areas for us to focus on now.”

Scientific research is a major contributor to the UK economy but ironically could be one of the biggest losers as a result of Brexit.

UK universities receive 10 per cent of their research funds from the EU and much of the country’s science is supported by grants from Brussels.

After only two weeks there are already signs that UK organisations are being passed over for EU science collaborations because their future involvement cannot be guaranteed.

Peake had barely been back on Earth a week when Britain voted to leave the EU in a marginal referendum that threw the future unity of the UK into doubt and sent the major political parties into crises from which they have yet to recover.

“I have seen some comments on Twitter saying everything was fine until Tim Peake came back to Earth,” he told the Guardian. “That did make me feel rather bad.”

Yesterday  (Wednesday, 13 July) Peake flew into London Heathrow from Houston to be greeted by a welcome poster featuring his own face. He was back in England for the first time in seven months following his six-month trip to the ISS. 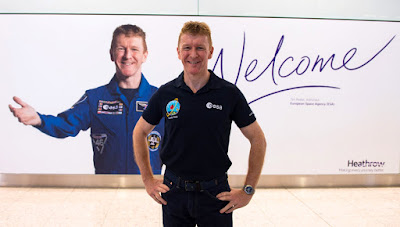 To celebrate his mission as ESA’s first British astronaut and to welcome him home to the UK, Heathrow unveiled Tim as one of its iconic welcome posters which will be viewed by 75 million passengers a year.

Photographs of Tim with his arms outstretched in his distinctive blue overalls, will be showcased across all terminals as part of Heathrow’s welcome campaign which has become a well-recognised greeting for passengers arriving at the airport.
Posted by Clive Simpson at 21:05