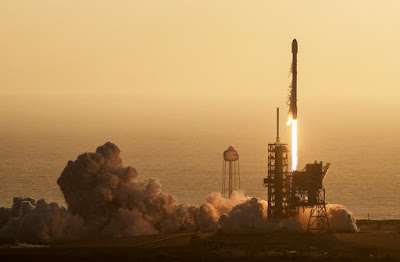 AMATEUR satellite observers are keeping a close eye on a US National Reconnaissance Office classified satellite (USA 276) to see whether it returns to the vicinity of the International Space Station (ISS).

After its launch into orbit from Cape Canaveral by SpaceX on 1 May 2017 analysts around the world quickly realised it was doing something more unusual.

Its orbit was similar to that of the Space Station and so could theoretically make close approaches to the orbiting outpost.

Then, just over a month after launch on 3 June, that is exactly what happened. "USA 276 made a close approach and effectively circled the ISS," reported satellite bserver Marco Langbroek of Leiden, The Netherlands.

Amateur satellite watchers have been tracking USA 276 since late May and their observations have resulted in ever-improving estimates of the satellite's orbit.

In the accompanying chart (prepared by Langbroek) showing the circumstances of the encounter, the brick-coloured box has dimensions of  4 x 4 x 10 km and normally, whenever an object looks like it is going to pass through the box, ISS mission controllers evaluate the possibility of a collision avoidance manoeuvre.

"USA 276 remained just outside the 4 x 4 x 10 km box at closest approach and as a result collision avoidance manoeuvres were not required,” adds Langbroek.

The question arises as to why a US spy satellite buzzed the ISS and senior satellite analyst Ted Molczan has published arguments for and against that possibility. "I am inclined to believe that the close conjunctions between USA 276 and the ISS are intentional," he says.

Molczan points out that USA 276 might be visiting the ISS to test Raven - a technology demonstration project on the ISS researchers are using to develop spacecraft autopilot systems.  Raven has visible, infrared and lidar sensors that can track incoming spacecraft, feeding the data to an onboard processor for decision-making about rendezvous and docking.

"I imagine that USA 276 could add to the Raven data set as follows," speculates Molczan. "If it can rendezvous, then it could keep station for long periods, during which it could change its attitude to present the sensors with a variety of views, under a variety of lighting conditions. The total data collected could potentially far exceed that from the other visiting spacecraft."

Another way of looking at the problem, is to ask why, if the ISS is not a target of USA 276, would the highly secretive NRO have permitted a launch so close to its plane, let alone one that yielded such close conjunctions not long after launch, which could only have increased public interest in the mission?

Langbroek says he does not believe for a moment that the NRO was not aware that the launch on 1 May would lead to the ISS close approach a month later. “It would be extremely sloppy of them - from a Space Situational Awareness (SSA) viewpoint - if they were not aware, especially given how close the orbital parameters are to that of the ISS.”

He adds: “This event was sure to attract attention which harms the classified character of the mission. USA 276 is relatively bright and the approach was bound to be noted by independent observers.

“Indeed, some space enthusiasts in Europe unaware of the issue who were out to spot Dragon CRS-11 and Cygnus OA-7 close to the ISS on 4 June, did accidentally see USA 276 passing some three minutes in front of it.

At the time of the launch - and at the request of the NRO -SpaceX cut off launch coverage two minutes and 48 seconds after liftoff, some 30 seconds after the booster’s first-stage separated from the upper-stage. The NRO has declined to provide further details about the satellite or its orbit.

Langbroek also speculates that such a close approach of a high profile object like the ISS is politically risky too.

“As the ISS is an international cooperation which includes two parties (the United States and the Russian Federation) that are currently geopolitically on an uneasy footing, sending your military payload so close to the ISS as one party is eyebrow raising,” he says.
Posted by Clive Simpson at 09:44 No comments:

﻿
AN AIR of confidence and normality prevailed at the fourth biennial UK Space Conference (UKSC) in Manchester this week despite its rather awkward juxtaposition between the city's terrorist atrocity and the country's unexpected general election.

But scratch a little deeper amongst delegates and exhibitors and there was one over-riding business concern just under the surface - the potential impact of 'Brexit' on the future of the industry.

Last June's referendum result seems to have been universally unpopular across both the rapidly growing UK space industry itself and in academic circles more generally.

So it was no surprise that speakers not constrained by pre-election 'purdah' rules took the opportunity during the opening plenary to have their say.

Speaking to more than 1200 British and European space experts at UKSC, Richard Peckham, head of trade organisation Ukspace and director of strategy for Airbus Defence & Space, raised the prospect of Brexit damaging the buoyant and expanding sector.

His general tone was that a 'hard’ or ‘no deal’ Brexit delivered by a future [Tory] government could seriously affect the UK’s £14 billion a year space industry, which is estimated to contribute around £250 billion a year across the British economy.


“Research-based academia and industry here and in Europe are completely entwined with goods, services, data and people crossing borders and I don’t think I’ve met anybody in the space industry or academia who wanted Brexit. Uncharted waters lie ahead,” he said.

“The space industry sees many challenges ahead as we navigate ourselves as a nation out of the European Union with the potential for major disruption to our businesses if things go badly.”

“Our industry is already feeling the pain, especially as customers and suppliers in other nations are making contingency plans for the worst case in which British companies become ineligible for future contracts, and are planning to exclude British companies now just to be on the safe side,” he added.

“To be realistic there are some other countries out there who will see this as an opportunity to take work from the UK and I would urge government not to approach these negotiations in such an adversarial manner.”

Jan Worner, European Space Agency (ESA) director general, reminded delegates that at last year’s ministerial meeting the UK had committed €1.4 billion to ESA’s budget until 2020 and he urged the UK to remain a strong member of the ESA community.

“Brexit is happening and you have made a decision which I do not like,” he said. “UK membership of ESA is not at all in question but of course a future exchange rate might have an effect in the future.”

He also said it would be vital to find a solution for the ESA family members living and working in the UK from other countries. 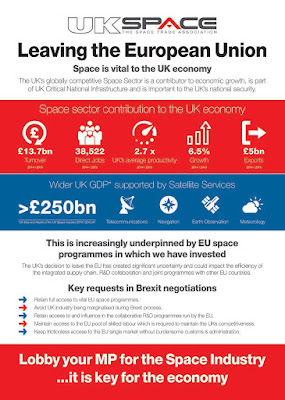 The UK space trade association presented a ‘facts and figures’ document and urged British delegates to lobby their MPs on behalf of the space industry.

“The decision to leave the EU has created significant uncertainty and could impact the efficiency of the integrated supply chain, R&D collaboration and joint programmes with other countries,” it stated.

Five key requests for the Brexit negotiations are listed:
The UK space industry is currently showing growth of around seven percent a year and provides jobs for around 40,000 people.

Prior to any notion that the UK might leave the EU, the Space Innovation and Growth Strategy (IGS) set an ambitious target to increase Britain's share of the global space economy form six to 10 percent by 2030, raising revenue to £40 billion a year and potentially creating more than 100,000 skilled jobs.
Posted by Clive Simpson at 10:19 No comments: