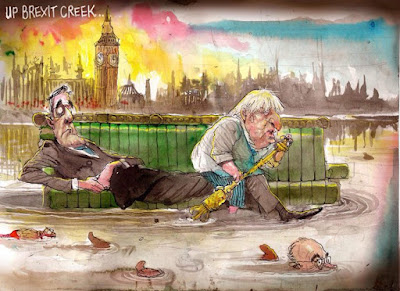 Boris Johnson won the Conservative leadership by posing as the candidate who could deliver Brexit and win an election.

He did not reveal, however, that he was calculating to purge the party of dissenters, despising its pluralist history, reinventing it as something anti-conservative and risking its destruction in the process.

In a few disastrous days he has engineered the loss of the Tories’ majority in the Commons and surrendered control of the legislative agenda to opposition MPs.

His discomfort in parliament on Wednesday this week was palpable, although he tried to mask it with the usual repertoire of excruciating bluster and childish gesticulation.

Even by Johnson’s questionable standards it was a moment of exquisite hypocrisy, identifying precisely the Conservative tradition that his agenda and methods seem certain to extinguish.

It seems there is a new acceptance amongst those in high political office - including Johnson and his raft of ideologically focused MPs - that bare-faced lying is okay if it supports your political ideology or personal ambitions.

The sight of Jacob Rees-Mogg Esquire, leader of the house, prostrating himself on the benches was not helpful either, signalling utter contempt to Parliament, the country and Her Majesty the Queen. By design or otherwise it was symbolic in every way.

In all this, the media are absolutely gagging for an election - you can hear the orgasmic 'bring it on' ecstasy in the voices of specialist political commentators, as objective analysis is thrown to the wind.

The main opposition parties led by Jeremy Corbyn and Joe Swinson are right to be suspect of the motives of Johnson and his creepy entourage in trying to engineer an election date before the end of October.

Rightly, it is now the opposition who should be setting the agenda and they need to hold their nerve in the face of unfounded rants and claims from Johnson.

The Prime Minister should stew in his own entrapment for a few more weeks. Let him wallow in his messy, minority government before scuttling off to Brussels to ask for an extension.

Alternatively, he could be brave and put everyone out their misery by revoking Article 50. Either way, an election can wait... for now.
Posted by Clive Simpson at 09:00