Taking over the night sky 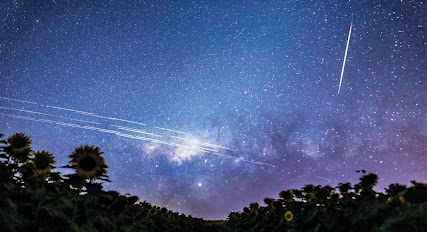 UNTIL relatively recently in human history the night sky remained one of the last unspoilt vestiges of our natural world. From the time of Galileo to the present day, astronomical observations from Earth’s surface have led to exceptional progress in the scientific understanding of the world around us.

Now, just as we enter the third decade of the 21st Century and a dynamic new phase in space exploration and exploitation begins, some of the current capability of astronomical instrumentation from the ground is potentially being endangered by the rapid development of micro-satellite fleets in low Earth orbits (LEO).

In the interests of preserving the ability to make meaningful visual and radio ground-based observations, the International Astronomical Union (IAU) is sounding a clarion call for greater protection and international safeguards.

The IAU claims that if the deployment of mega constellations remains unchecked the view of the night sky will be increasingly impeded by artificial satellites, not only visible to the naked eye but also crossing and scarring professional and amateur time-lapse observations alike with parallel streaks at all latitudes.

SpaceX has already embarked on its ambitious Starlink project to populate the sky with some 42,000 satellites which, together with planned constellations such as those from OneWeb, Amazon and others, means there could one day be more than 50,000 small satellites encircling the Earth at different low altitudes.

These small, mass-produced satellites orbit very close to Earth with the intent to provide speedy internet connections via low-latency signals. But that proximity also makes them more visible and brighter in the night sky.

Astronomers argue that such constellations will severely diminish our view of the universe, create more space debris and deprive humanity of an unblemished view of the night sky. If these networks come to fruition, they suggest that every square degree of the sky will eventually have a satellite crawling across it throughout the whole observing night.

As space becomes ever more commercialised the speed of such development is quickly overtaking the existing, globally agreed rules governing space activities. Mega-constellations are just one area where new rules of governance are urgently needed. Others include the exploitation of resources on the Moon and elsewhere, preserving peace and resolving disputes, and rules for everyday living in space.

Recognising the urgent need for coordinated action, the space nation Asgardia is organising a second congress in its ‘Paving the Road to Living in Space’ series. Taking place at McGill University in Montreal, Canada, in 2021 (www.alc.space), it will focus on discussing key aspects of space law needed to ensure the success of future space exploits.

Of course, ROOM fully supports the growth and advancement of space technologies and the ensuing benefits they bring to everyday life, business and commerce across the globe.

But it would be ironic indeed if, by exploiting LEO without due responsibility, we neglect to consider the resultant damage to scientific research and a previously unblemished part of our natural environment that deployment of such new technologies could unwittingly deliver.

The urgent question is, do we continue to rush headlong into deploying massive new orbital networks without checks and balances, and with scant regard for the heavens above - or can the global space community approach this kind of thing in a more mature and responsible manner that is fair to everyone?