Awoken at 0545 am after a restless, noisy night. Breakfast in the hotel 30 minutes later followed by some last minute packing. By 7 am we were heading in a rickety old coach towards Kathmandu’s national airport. Despite the hour the streets were already chaotic.

At the airport we entered through ‘local' departures. It was a hurly burly, do-it-yourself kind of check in but somehow it seemed to work. There were already some eight planes awaiting as we were bused out to a twin engined Otter operated by Yeti airways. These planes can make four or five trips a day to somewhere like Lukla, some 30 to 40 minutes of spectacular flying time away.

Localised fog out on the runway meant everything was grounded until the sun was properly up to burn away the early morning mist. We hung around outside the plane with the chance to closely examine what looked like a flying relic of days gone by. Hopefully good enough for one more trip into the mountains.

Thought it’s not entirely logical, I feel thankful that we have two pilots as we career down the runway and buzz up into the air away from Kathmandu.

It’s a tight fit for 16 people and all the trekking gear for 10 days and we have an intimate view of the two pilots at the front. Soon we are flying over hilly farmland at about 10,000 feet. To the left there are distant towering mountain ridges. 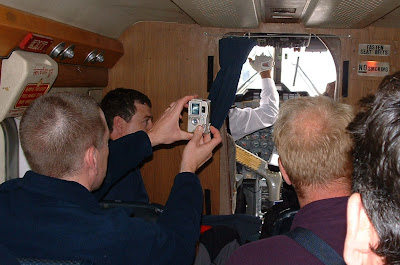 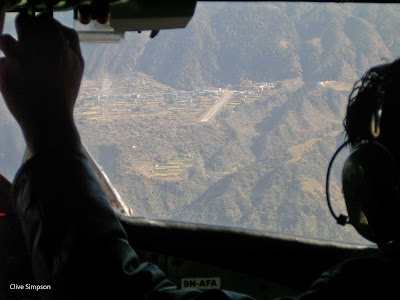 As we can see through the cockpit window the tiny mountainside landing strip comes into view. It has to be a pinpoint touchdown here as the runway is short and ends in a wall of mountainside. No second chances as the pilots line up for what must be one of the most exciting landing strips in the world.  It is a unique and truly memorable flight.

The mountainside settlement of Lukla, gateway to Everest, is bustling with people and small aeroplanes and even a couple of helicopters. No sooner has our plane turned into the tiny parking area and another is buzzing down the runway to leap into oblivion over the mountain edge. Bags and people are unloaded immediately.

The airstrip at bustling Lukla was built by Sir Edmund Hillary and his friends to service the Everest region when he began his work of building schools and hospitals for the Sherpa people. 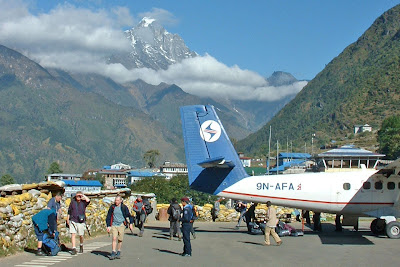 We are immediately impressed by the scale of the huge peaks that surround the settlement, as we greet our Sherpa team and take time loading gear with the porters and yaks.

Our party sets off from Lukla at about 11 o’clock, down from the landing strip through a narrow cobbled street. Tiny shops spill onto the walkway and there is the smell of wood fires with smoke rising into the still air.

We snake downhill on a broad and well-marked rocky trail towards the Dudh Kosi, a raging river that flows from the highest peaks. At 10,000 feet the air is already thinning and cool, and you can taste the mountains with every breath as - it is both intoxicating and exhilarating. 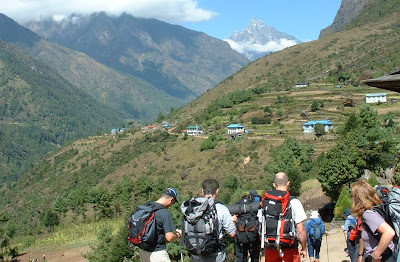 Email ThisBlogThis!Share to TwitterShare to FacebookShare to Pinterest
Labels: Nepal

Our flight from London to Kathmandu seemed dark. By the time we flew into the bright lights of Bahrain for a 1.5 hour stop-over it was early evening. Then it was on to Abu Dhabi in the twilight hours. A two hours delay in a dome-shaped terminal, with little to do in the middle of the night.

We were travelling Go Air, an Arab-based airline which serves curry flavoured meals whatever the time of day. Tasty, but lamb curry at 3 am in the morning local time was a big adjustment and just the first cultural challenge for a momentous trip ahead.

There was a delay on our morning flight into Kathmandu international airport as a bank of fog formed on one end of the sloping runway. Our pilot circled for 30 minutes then went into land - but just 30 seconds or so before touchdown, as dropping into the cloud tops, he pulled out in a steep climb, up and out and away.

We flew on to Dakar where we landed for refuelling. Just over an hour each way and about 45 minutes on the ground before returning to Kathmandu. It had been a long ‘day’ since leaving London Heathrow but at last we had arrived.

Stepping off a plane into Kathmandu is an exhilarating shock - the sights, sounds and smells quickly lead to sensory overload after the confines of several aeroplanes.

Buzzing around the crazy traffic in a local bus, trundling down the narrow winding streets of the old town in a rickshaw, marvelling at Durbar Square or dodging the tiger balm sellers and trekking touts in Thamel - it is an intoxicating, amazing and exhausting place.

As the largest (and pretty much the only) city in the country, Kathmandu also feels like another developing-world city rushing into a modern era of concrete and traffic pollution. 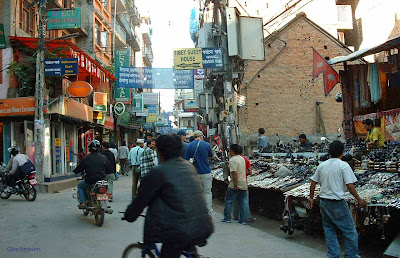 But a walk in the back streets and the Nepali capital's amazing cultural and artistic heritage reveals itself in hidden temples overflowing with marigolds, courtyards full of drying chillis and rice, and tiny hobbit-sized workshops. 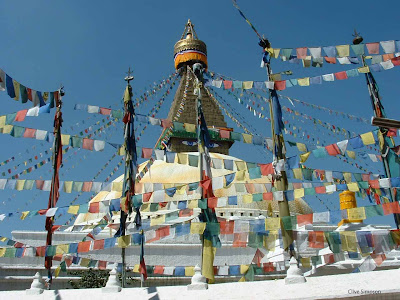 At an altitude of 1336 metres above sea level, Kathmandu is an exotic and fascinating showcase of rich culture, art and tradition - and for us, of course, an important gateway to the Himalayas. 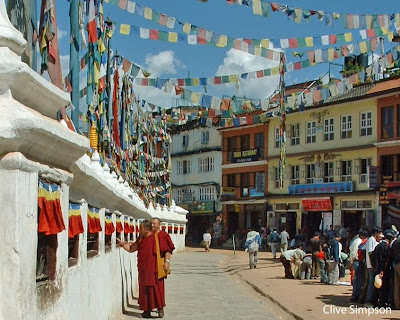 Late afternoon we arrived at Hotel Shanker, a stunning former royal palace full of character and charm. The weather was warm and sunny, if a little bit muggy.

Beautiful manicured gardens with potted plants, many of them Marigolds. We were all given garlands of Marigolds on alighting bus from the airport, a traditional form of Nepalese welcome. Darkness had descended by 6 pm.

Our hotel for the night had a restaurant called Kailash restaurant and two bars - the Kunti Bar and the One Eyed Bar. The former boasted a traditional setting of intricate wood carving and lattice windows. 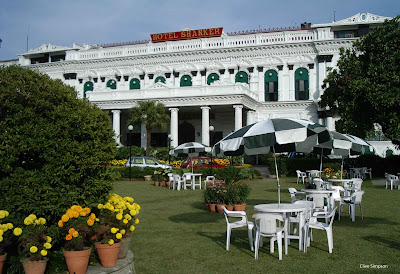 At 21:50 local time we had a buffet meal in hotel dining room. Pick up remaining gear and back to room for bed to grab as much sleep as we could. The mountains of our dreams beckoned.
Posted by Clive Simpson at 18:17

The ‘circus’ at Everest Basecamp was non-existent on this bright and sunny morning in early November in the heart of the Himalayas. The still air was crisp and cool, and the midday sun pierced the iridescent sky, rays of warmth feeling good on the face.

No tents, no people, no cameras – the buzz of expedition fever had dissipated along with the changing weather. Just a few tattered prayer flags every now and then, breaking the ground-level monotony of grey rock and Khumbu ice. You can’t even glimpse the summit of Everest from this fabled ‘launchpad’, and so I wondered... 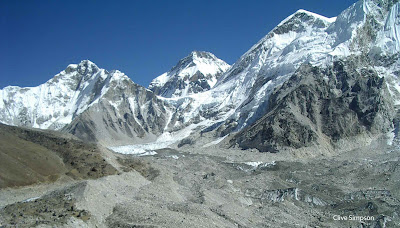 In the days approaching Basecamp we had learnt from other trekkers along the way that it was now ‘empty’, the last and unsuccessful summit expedition of the year having returned to Spain three weeks earlier.


For a trek that was billed ‘Everest Basecamp’ it was now something of a dilemma – it had been our big chance to fleetingly rub shoulders with those taking on the highest mountain on Earth. But the circus and its paraphernalia had left town. 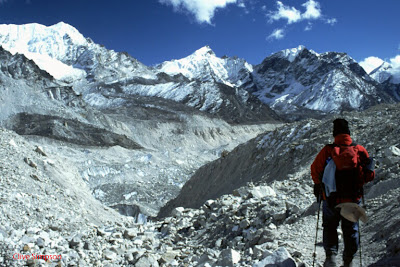 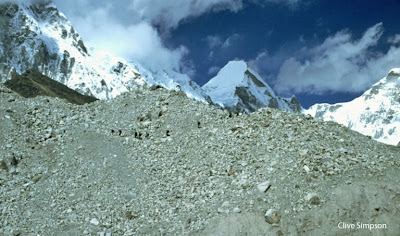 Several hours back from Basecamp along a tortuous, zig zag route of rock and ice is the remote settlement of Gorak Shep, in the shadow of Nuptse. Here the trappings of Everest expeditions past and to come can be seen – neatly stacked aluminium ladders lashed behind huts for self-keeping and a compound of empty ‘gas’ bottles.

But we jump ahead. Back in September, the Lighthouse Keeper asked ‘How high is Everest?’ and promised to enliven the dark winter nights by marking the tenth anniversary a first visit to Nepal with a retrospective blog, re-living the journey in words and pictures – from the excitement and heat of Kathmandu to the extreme cold and wilderness of the lower reaches of Everest.

So, in the words of John Ruskin, our journey to these ‘great cathedrals of the earth, with their gates of rock, pavements of cloud, choirs of stream and stone, altars of snow, and vaults of purple traversed by the continual stars’, starts here. 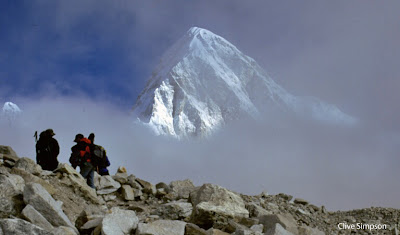 Posted by Clive Simpson at 14:20 No comments: