No walking this afternoon as having lunch at Kangjung which is also where we are sleeping. Stopped at Everest View Hotel en route and also visited simple Sherpa Museum just after we set out from Namche. 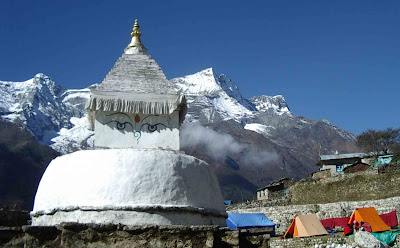 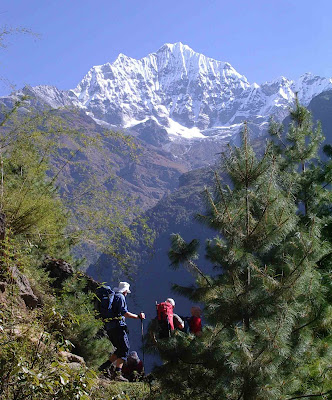 Turned colder early this afternoon as the sun disappeared about one o’clock. The youngest member of our team, David, aged 19, rather worryingly asleep in a room at the tea house. He came on lower level easier walk as he was suffering since yesterday evening quite severe symptoms, in my opinion, of advanced mountain (altitude) sickness.

Our trek leader said we’ll see how he is tomorrow, although I heard her at lunchtime tell the Sirdar she was worried. Altitude sickness should be taken very seriously, according to the books I had read. 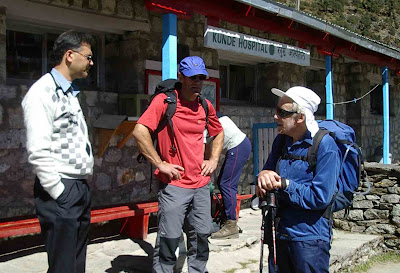 So far everyone else seems okay. The pace was slower today and easier to cope with. Apparently there are a number of contingency options and alternative routes to cope with a variety of circumstances.

My own cold and cough, which struck me on the second night, is much the same, not really bothering me until I lie down, mainly a running nose and hacking cough.

It’s 15:30 now. There is thick monstrous cloud all around. The light is bright but flat. The tent cold. I will transfer to our room in the tea house soon to keep a little warmer. I expect we should make the most of this luxury as it will only get colder as the trek progresses.

Ninety minutes later after a flurry of activity inside two of our porters burst through the door with a very ill-looking David propped between them. It was dark and they were all dressed for the extreme cold. I sensed a real emergency was unfolding before our eyes.

David was carried back across the mountain by the two brave porters and led by our Sirdar. It was a walk of mercy through the bitterly cold night, taking some four hours to reach the Kunde hospital where we had taken a short break that morning shortly after leaving Namche.

Our trek leader was visibly upset by now and told us she wanted a ‘second opinion’ on David’s rapidly deteriorating condition which had rapidly turned into acute altitude sickness.

It was 21.20 and I had just turned in. We had spent the evening chatting in the warmth, drinking hot tea and playing card games for 10 Rupees a go in the tea house. It was reported back that David had been put on oxygen and was staying in the remote mountain hospital overnight. That was a life-saver. 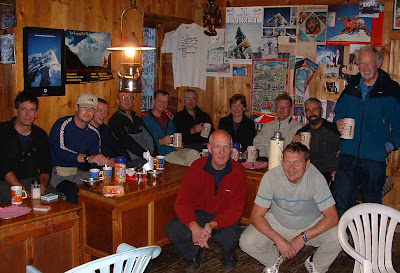 Cloudy mist hangs over the campsite tonight. Somehow it doesn’t feel so cool and it’s nice to have been inside the warm of the tea room for much of the late afternoon and evening. Heated by a stove powered by Yak dung and lighted by Tilley lamps.

We heard the next day that David had been evacuated by helicopter to hospital in Kathmandu. At the lower altitude he would thankfully make a full recovery - it had been a close shave and this trek was definitely over for him. 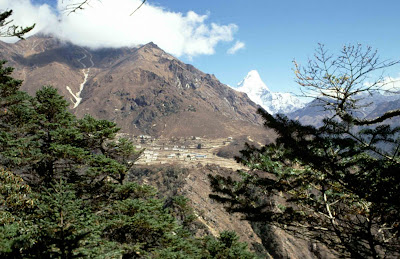 A day of crossing and re-crossing the thundering glacial ‘Dudh’ (milk) river, walking through pine forests and cleared areas of terraced fields, growing a surprising variety of crops. A series of small hamlets mark the way as we slowly gain altitude, with spectacular 6000 m mountain peaks unfolding above.

We pass through the gates of the Sagarmartha National Park, the establishment of which has seen a significant attempt to stem the use of firewood in the area. Today, self-contained trekking groups must use only kerosene fuels for cooking, and tea-houses and lodges are encouraged to use kerosene or yak dung.

We follow the river course to the confluence of the Dudh and Bhote rivers, and cross a spectacular high bridge before commencing our ascent to the village of Namche Bazaar, the Sherpa ‘capital’ of Nepal. 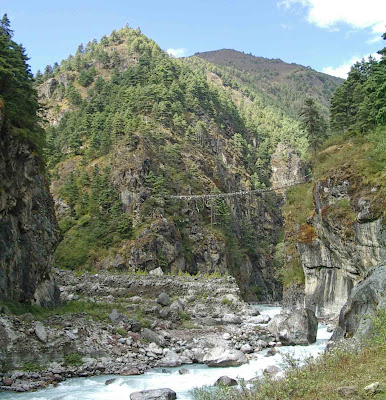 It is a tough climb towards the end of the day as the trail zig zags steadily upwards through a forest of pine to a vantage point that provides our first glimpse of distantMount Everest. The trail continues to climb and meander to Namche, and the sight of this prosperous village spread within a horseshoe-shaped valley opposite the beautiful peak of Kongde Ri is worth every step.

At Namche we have emerged from the narrow lowland valleys and after an acclimatisation day will continue into a changing landscape of broad glacial valleys punctuated by the moraines left by retreating glaciers. 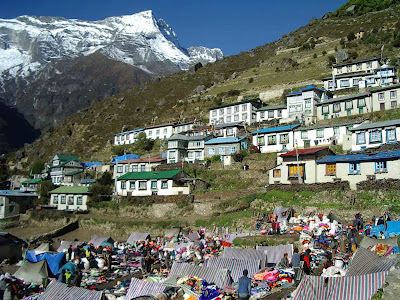 This stunningly located gateway to so many paths in history straddles the sides of the valley at some 12,000 feet above sea level - you can almost taste the atmosphere in the air, the sense of hope, joy and wonder to come.

It was called a rest day but after breakfast we were off, thought this time with a light pack. We climbed steadily up the side of the village to a museum and then up towards a view point. It was hard going as we put on 500 m.

The skies had been rather cloudy to start with but the sun came out mid-morning. It was a steep twisting climb, but first chance to see Everest in the distance though was thwarted by distant clouds.  Some of our group walked on to the Everest View Hotel but they didn’t see it from there either.

The walk back down was equally punishing in the heat of the day - twisting hairpin footpaths with wonderful panoramic views of Namche at every turn.
.
By the time we got down I was tired with a headache, even though it had been a fairly slow pace. After drinks and lunch the headache disappeared and so did the weariness.

I spent time in the afternoon looking round local ‘shops’. Very colourful and spread along tiny, steep streets with Yak passing-room only. I bought a fake North Face down jacket at a bargain price which I thought might be useful later for the cold nights at higher altitude.

It seemed my body was adjusting to the altitude. Today’s up and then down again walk had helped. Breathing was now easier than the first night at Namche.

But we would be back at square one tomorrow After the climb out of Namche the first part of the day would be fairly level, then a descent into the valley followed by a steady and steep climb. 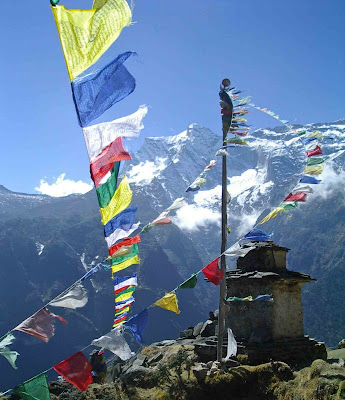 After lunch in a wooden tea house we set off from Lukla about 12 noon for a relatively short up and down trek along a well-trodden path into the valley.

Our starting height was 10,000 feet and the path seemed more down than up. The terrain, if not the view, was not too different from a practice weekend earlier in the summer on Ben Nevis in Scotland. The warm sun was on our backs and the air felt clean and fresh. 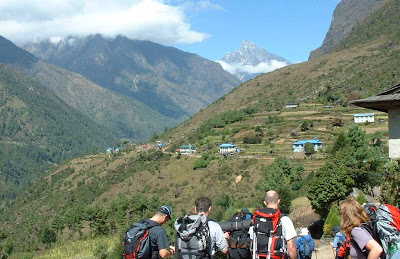 This part of our 10 day trek is not a wilderness trail with many people were going back and forth, including the Yaks with their shaggy mountain coats and porters carrying impossible loads.

At this point the altitude didn’t appear to be making any significant difference. We camped behind a lodge and tents were allocated. Tea and local biscuits, then chance to sort out our gear before a meal at 6 pm. 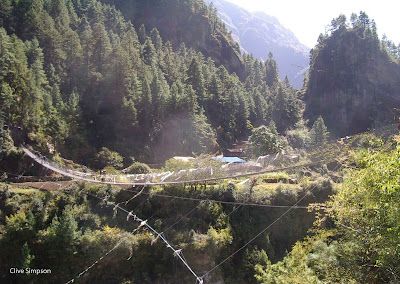 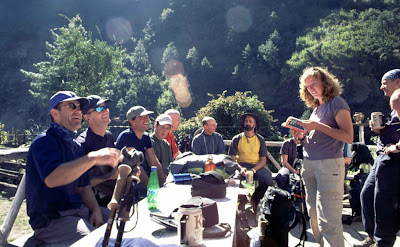 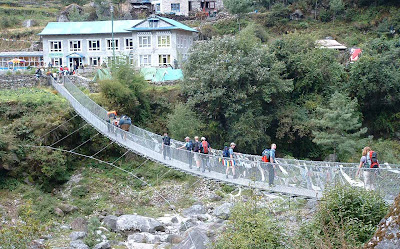 It had been a brilliant first day - from the bustling streets of Kathmandu to the foothills of the Himalayas inside a few hours. Quiet, peaceful and now turning quite cool, with the sound of crashing water in the river gorge below.

We had a briefing from our Sirdar called Tek who was responsible for making sure everything went smoothly. We could expect much harder days to follow.

We would be woken at 6 am with hot tea to drink and a bowl of warm water for washing. Breakfast would be at 7 am, by which time we would have been expected to clear and pack our packs, leaving our tents empty and ready to hit the trail by 8 am, just as the sun was rising above the mountaintops.

We were camping tonight at the tiny settlement of Phakding where the first of many suspension bridges was slung high across the raging river below. In our deep, sheltered gorge the thunderous sound of the river filled the air. The night air was fresh and sharp, and the sleeping bag warm.

Our first night of camping under Himalayan skies was one of relative comfort. 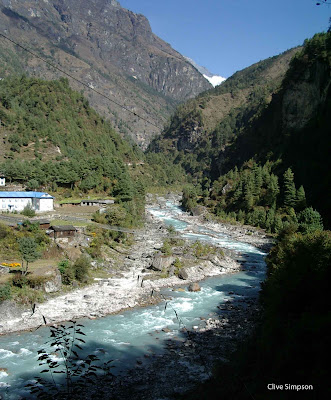