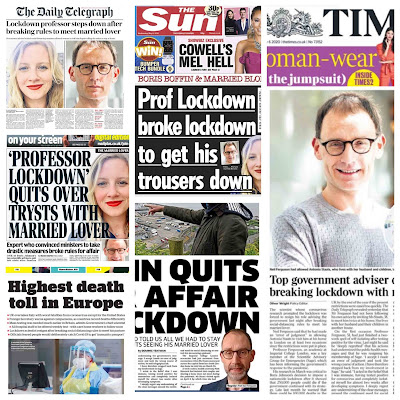 A COUPLE of weeks on from my ‘Car crash politics’ blog article and, despite any optimism or benefit of the doubt, little seems to have changed - particularly in the fantasy world of Westminister spin.

The Johnson government continues to prove itself a master manipulator of the media agenda and thus continues to mis-inform public opinion, a trait it started long before it ever came to power, if you get my drift.

Yesterday’s tawdry, yet skillful, PR manoeuvres highlight this yet again in an unambiguously sinister way to a still largely unsuspecting and sycophantic public. However, one suspects the tide will eventually have to turn.

Given Johnson’s blatant playing of the media in his previous life, this should come as no surprise to any astute observer of current British politics. He liked to call himself a “journalist” but in reality he was never more than an eagliterian over-inflated columnist. And he got the sack for blatant lying. Now he likes to call himself “prime minister”.

Yesterday’s actions were breath-taking in their craven alacrity because it was the day of all days when the tripmeter of recorded deaths from covid-19 tipped the UK into the worst in Europe category, and second only in the world to the United States.

Unsurprisingly, and true to form on such an auspicious day, Johnson was nowhere to be seen and so the daily Downing Street presser was hosted by the hapless Raab, who shamelessly tried to hide the growing magnitude of the UK death toll by suggesting it wasn’t fair to make country-by-country comparisons at this stage.

Acutely aware that all of this would normally make front-page headlines the next day and be the lead item on television news programmes, the government’s slick PR machine masterminded by Cummins had a devious plan waiting in the wings for such a time as this.

Just as the figures were being “announced” at the presser, a reporter from the Daily 'Torygraph' (aka Daily Telegraph) was receiving a private briefing from a Downing Street insider about a key member of SAGE who had transgressed the golden rules of social distancing some four weeks previously.

The story about the resignation of Neil Ferguson, who had “entertained” his lover, was destined to push the increasingly tragic coronavirus death figures off the front pages and top of the news bulletins. A perfect bit of PR timing and manipulation.

I certainly do understand that Ferguson's actions genuinely upset some. But make no mistake his story shouldn't be on any front page, especially at the expense of the UK's covid-19 death figure.

It does look like - from the dates of when the "trysts" took place - that someone had waited to hand it over to the Telegraph, calculating the best moment to publish it and in the process help bury bad news.

On the BBC, morning bulletins were calling Prof Ferguson's visitor “his married lover”. Not so may days before the same airwaves were gushingly celebrating the birth of Carrie Simon's baby by the prime minister, without a the merest mention of you know what.

Ferguson was obviously wrong to break the lockdown and so probably had to resign. But remember cabinet minister Robert Jenrick’s ‘illegal tryst’ a few weeks back? Unlike Ferguson, he’s actually part of the government that introduced the lockdown rules but he didn’t resign (yet). Double standards or just rank hypocrisy?

It seems that everything about this story and the ensuing flood of right-wing hate on social media for ‘Dr Doom’ screams that this was a deliberate ‘political’ operation mounted by people who seek an early end to the lockdown.

If the UK ends up with the highest death toll in the world relative to population size, this won’t be bad luck or because of the hard work of NHS staff, carers and the like. It will largely be down to the strategy of our government.

There's an almost biblical irony that the Conservatives under Johnson "took back control" of the UK on 31 January when Brexit became a reality and then pretty much lost it again to a microbial life-form exactly 40 days later.

I have no joy in seeing that Britain now has worst figures of any country in Europe. If only it were different. I wish the government had done well and proved of me and all who doubted them wrong. But in this sad and difficult time, negligence and ideology haven taken preference over collective safety and public health. I can only say expect more of the same.