As a keen photographer the Lighthouse Keeper is always looking for a new angle or perspective on a familiar subject - but from an earthly vantage point even perched atop of a high crane is no match for the kind of views astronauts have from the orbiting International Space Station.

This night time view of India-Pakistan borderlands was one of a series of night-time shots captured recently by one of the six crew members, who often say that one of their favourite off-duty pastimes is gazing back at Earth as there is "always something spectacular to see". 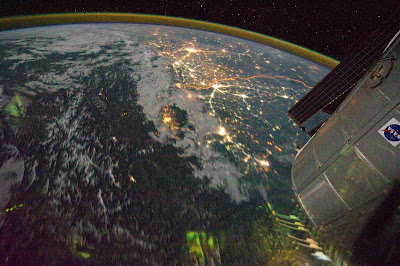 Clusters of yellow lights on the Indo-Gangetic Plain of northern India and northern Pakistan reveal numerous cities both large and small.

The lines of major highways connecting the larger cities also stand out. More subtle but still visible at night are the general outlines of the towering and partly cloud-covered Himalayan ranges immediately to the north (left).

A striking feature of this photograph is the line of lights, with a distinctly more orange hue, snaking across the central part of the image. 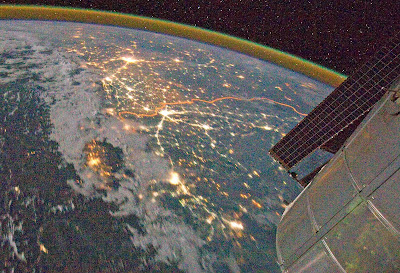 It appears to be more continuous and brighter than most highways in the view and is actually the fenced and floodlit border zone between the countries of India and Pakistan. The fence is designed to discourage smuggling and arms trafficking between the two countries.

This image was taken on a digital SLR camera with a 16 mm lens to provide a wide field of view, as the Space Station was tracking towards the southeast across the subcontinent of India.

The distinct, bright zone above the horizon (visible at top) is produced by airglow, a phenomena caused by excitation of atoms and molecules high in the atmosphere (above 80 km altitude) by ultraviolet radiation from the Sun. Part of the ISS and a solar panel array are visible at right.

This photograph below, taken from the Space Station at the end of July 2011, shows the Moon with the limb of Earth near the bottom, transitioning into the orange-coloured troposphere, the lowest and most dense portion of Earth's atmosphere.

The troposphere ends abruptly at the tropopause, which appears in the image as the sharp boundary between the orange and blue-coloured atmosphere. The silvery-blue noctilucent clouds extend far above the Earth's troposphere. 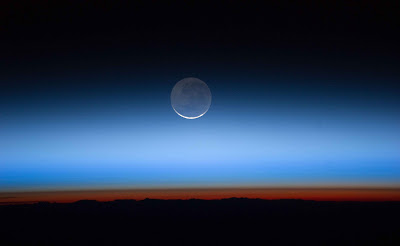