While the politicians of Rome were combusting, if not actually burning, this week, the medieval town of Lucca in the heart of Tuscany was a pretence of calm and polite political dialogue.

In the heart of the walled town, the ornately decorated Palazzo Ducaleis - adorned inside with monumental paintings and wall murals - was the focus for a very different kind of political forum, the Third International Conference on Space Exploration.

Representatives from 28 countries, the European Commission and the European Space Agency (ESA) met for what was described as the first high-level ‘international space exploration platform', which in itself sounds rather like it could be an orbiting satellite.

The organisers shipped in 15 or so journalists from the far reaches of Europe - including Poland, Latvia, Finland and other seemingly unlikely space-faring nations - to help get the message out.

For the rookie space writers among them you could say news was a bit thin on the ground because this wasn't a conference about bold new space projects but more of an attempt to create a new forum where the politics of future space endeavours can be discussed and agreed upon - with the aim of bringing about greater degrees of international cooperation in the future.

Apart from the noticeable absence of anyone from India, all the major space-faring nations - and many who have aspirations in that area but don't really do much at present - were represented at various levels of authority.

Britain's space minister David Willetts, for example, apologised for not being in Lucca in person through his representative Keith Mason.

His opening gambit described the UK as being "well-positioned and very interested" in developing nuclear technology for powering future exploration spacecraft.

Mason also emphasised that lowering the cost of access to Earth orbit was becoming increasingly important.

"We are backing technology to reduce this cost by an order of maginutude," he said, hinting at but not exactly naming the Reaction Engines' Skylon spaceplane project.

The conference went on to endorse the ‘Lucca Declaration' and recognise the benefit of a continuing dialogue on future space exploration ‘to help identify potential areas for international cooperation'.

Essentially the government representatives committed to begin open, high-level policy dialogue on space exploration at government-level for the benefit of humankind. The United States offered to host the next get-together in 2013.

China's delegate Jianalin Cao was proud to trumpet recent Chinese successors and highlighted the country's slow but steady progress in taking up the space mantel.

I asked him whether China had aspirations to take its involvement with Europe's long-delayed and woefully over budget Galileo satellite navigation system further?

Speaking through an interpreter - despite his seemingly perfect command of the English language - Cao stated that his country was "starting a new cooperation" with Europe on satellite navigation.

But other than confirming that problems with equipment compatibilities and frequency spectrums were being overcome, little else was forthcoming.

The question of whether China might soon dip into it's pockets and become a major part of Galileo must remain conjecture for the time being. 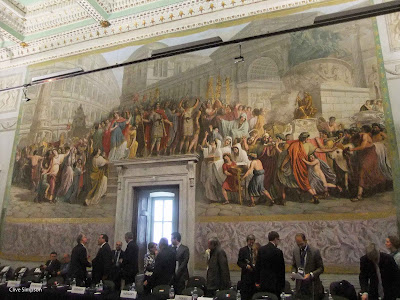