Keep you eyes open in and around Florida and you never quite know what you might see. Heading back to Orlando airport the other week demanded a quick detour for the final and unexpected opportunity to photograph a Space Shuttle in a most unlikely location.

Having previously visited Atlantis in its new home at the Kennedy Space Center Visitor Complex a few days earlier this wasn’t quite the real thing - but the marine work yard setting on Merritt Island made up for that.

Glance straight ahead along the 528 out of Cape Canaveral and you might easily have missed Inspiration reposing, as if in a junk yard awaiting scrapage, amongst yachts and boats of all sizes that were in for repair or salvage.

A sign at the entrance discouraged tourists from popping in to take photos but the owner was just locking up and seemed happy enough to make an exception for a couple of journalists with English accents.

The timing was almost perfect because only a few days later on 27 April - and almost five years after NASA's last Space Shuttle had landed in Florida - an orbiter returned to the runway at the Kennedy Space Center (KSC).


Inspiration, a full-scale mockup - previously on display at the now-former location of the US Astronaut Hall of Fame in Titusville - was rolled out to Kennedy's Shuttle Landing Facility where it will be rebuilt into a travelling exhibit. 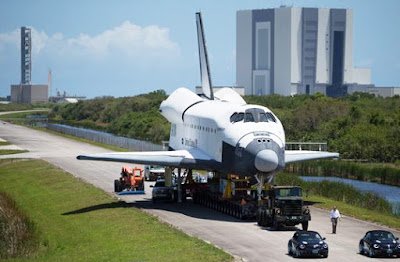 LVX System, which acquired the 37 m replica from NASA, moved Inspiration from the Hall of Fame to a work yard in January. It intends to use the Shuttle for both educational outreach and marketing.

Over the past four months, work has been done at the marine yard to bolster the orbiter’s structure and aesthetics in preparation its move at the end of April.

Inspiration was barged from the Beyel Brothers Crane and Rigging yard on Merritt Island to the turn basin opposite the 52-story-tall Vehicle Assembly Building (VAB) at KSC before being towed to the Shuttle Landing Facility.

Now parked on a concrete apron near the air traffic control tower at the midpoint of the runway, Inspiration will be further modified for its new ‘mission’ before heading out on America's waterways.

Although details are still being determined, LVX plans to prepare Inspiration so that it can travel by barge along the nation's rivers, stopping at ports where the public might otherwise never see a Space Shuttle.

LVX plans to outfit Inspiration's crew cabin and flight deck so that simulated missions can be ‘flown’ by those who visit the Shuttle on its tour. There’s life in the old girl yet! 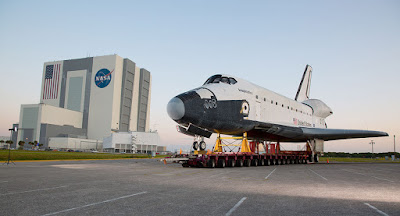