“Why, sometimes I've believed as many as six impossible things before breakfast,” said Alice in Lewis Carrol’s Alice in Wonderland.

And at times in recent months it has seemed that we too might be living in some kind of political fantasy land. But as we jump from one preposterous situation to another one thing is becoming clear - the world is being rapidly transformed in a period of dizzying transition.

For centuries the dominant form of information was always the printed page, meaning knowledge was primarily delivered in a fixed format that encouraged readers to believe in stable and settled truths.

Now, we are seemingly caught in a series of confusing battles between opposing forces: between truth and falsehood, fact and rumour, kindness and cruelty; between the few and the many, the connected and the alienated.

Between too the open platform of the world wide web - as its architects envisioned it - and the gated enclosures of Facebook and other social networks; between an informed public and a misguided mob.

What is common to these struggles - and what makes their resolution an urgent matter - is that they all involve the diminishing status of truth.

Which is not the same as saying there are no truths because, as 2016 has made clear on both sides of the Atlantic, it simply means we can no longer sensibly agree on what those truths are.

In our 24/7 inter-connected culture what now counts as fact is increasingly a view that someone feels to be true. And technology (social media like Facebook have become purveyors of ‘news’) has made it very easy for these ‘facts’ to circulate in a cascade of information with a speed and reach that was unimaginable even a decade ago.

It means the political bombshells of the year, such as the UK’s referendum vote result and the emergence of Donald Trump as President-elect, are not simply the by-products of a resurgent populism or the revolt of those left behind by global capitalism.

Like Brexit, the rise of Trump is also partly a symptom of the rise and rise of social media and at the same time the mass media’s growing weakness, especially in controlling the limits of what it is acceptable to say.

During a vitriolic campaign Trump articulated many ‘truths’ which quickly circulated on social media and became enough on their own to help him secure a winning share of the popular vote.

Such a situation reflects too the ‘promises’ made by those campaigning to leave the EU during the UK referendum. Even basic scrutiny at the time revealed many to be empty, vacuous and unworkable promises. But they all too easily became accepted as ‘truth’.

For the UK, an unsavoury picture of a post Brexit world is now beginning to emerge: one where the rule of law, due process and even fact itself might easily crumble before the might of the mob, who themselves are directed by the Machiavellian schemes of press barons and wannabe dictators.

It seems that prime minster Theresa May appeals to a stereotype that has a deep grip on the English psyche. Sober and commonsensical, she portrays a moral seriousness one might expect from a vicar's daughter, whilst at the same time displaying an Alice in Wonderland quality. 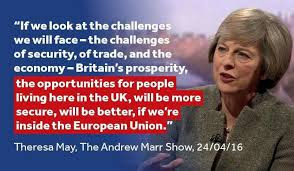 Her public image - based on a track record of capitulation since taking office - might be described as something akin to "pretence” and, so far, her dominant side seems even more superficial than David Cameron.

It is a tribute to the power of cliches and soundbites that we fail to see what is in front of our noses and so few have noticed - the main reason Teresa May is prime minister is because she put ambition before principle.

During the referendum campaign, and probably ever since, May has proved herself somewhat ordinary as an orator of any note. There is certainly no evangelical fervour that her upbringing as a vicar's daughter might have instilled.

But as a politician on the make she seems close to perfect. When Craig Oliver, David Cameron's former chief of communications, wondered if she was secretly an ‘enemy agent’ for the leave side, he was perhaps being too devious.

In fact, May was just making a smart political and career move. Apart from speaking in secret to the likes of Goldman Sachs, she kept her views about the economic consequences of Brexit quiet - so that the Conservative right might accept her as leader if Cameron lost.

Failing to state your honest opinion on the most important decision Britain has taken in decades may seem cowardly enough. But the consequences of May's pretence do not stop with the referendum.

Her manoeuvres since the summer (including on Hinckley B, Heathrow airport and Nissan) have forced her into a position where she must make arguments she cannot hardly believe, on behalf of causes she cannot possibly believe in.

Far from ‘taking back control’, her leadership to date also shows that Brexit is depriving ordinary people of the ability to take decisions, giving privileges to the special interests the leave campaign claimed it was fighting against, and imposing burdens on the taxpayer far greater than the mythical £350 million a week that Vote Leave claimed was sent to Brussels.

May and her defenders say she is responding to the absolute will of the British people but even without the muddy waters of truth versus untruth and a still confusing Brexit strategy, a 52-48 vote was hardly the people speaking as one.

Perhaps, in this post-referendum, pre-Brexit Britain we can more easily understand our prime minister by seeing that she is no different to many others when it comes to abandoning beliefs in favour of ‘truths’.

Disappointingly since taking office, she has failed to level with the public and confront them with the hard choices ahead. Rather than speak plainly, she has proffered the notion that Brexit will be painless.

Now, as prime minister of 'pretences', May is running a government where feelings seem to matter more than fact. She pretends the country should leave the EU, even though she knows its best interests are as a member of the single market.

She offers the illusion that the people are taking back control, even as the freedom to act is lost. She cuts deals in secret, in the hope that the public will never realise that her land of make-believe is going to be an expensive and very different place to live.

For many reasons, the political earthquakes of 2016 have been tectonic in nature and herald a significant lurch to the right in global politics where false truth and self-interest trumps rational and reasoned argument.

How far this continues - and even spreads to other countries in the year ahead - remains to be seen. Strong, statesmanship-like leadership is called for as the clouds of chaos amass menacingly on the political and economic horizons.
Posted by Clive Simpson at 13:50