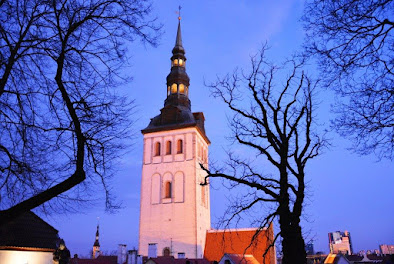 I CAME across them all of a sudden the other night after climbing the steep, cobbled street from the old part of town and turning through an ancient stone gateway at the top of the escarpment. Tallinn's giant, faceless monks.
They have no eyes or facial features but, even so, seem to stare at you through the cold, dark night as they silently keep watch over the ramparts of the old walls, like some menacing alien statues in an episode of Dr Who.
The sculptures of the monks in Tallinn's Danish King’s Garden allude to the stories and legends associated with this historically significant yard and liven up the area for both the residents and visitors alike.
At night the three 2.5 metre bronze statues - Ambrosius, the Expectant monk, Bartholomeus, the Praying monk, and Claudius, the Watchful Monk, cast an eery presence over the Danish King’s Garden where they stand.
Since the end of the 18th century, when the towers surrounding this garden area began to be converted for the use as living quarters, many strange stories have emerged allowing the area to lay claim to be the most haunted place in old Tallinn. 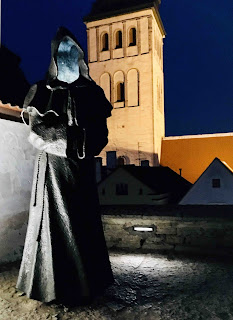 Among the most popular was the ghost of a monk, or even several monks at a time. Usually, the monk appears as a giant figure of light and other times as a provider of admonishing or inspiring messages. The most recent sighting is claimed to have been in the mid-1980s when the Polish workers were restoring one of the the medieval towers.
It is not even the end of November but here in the northern Baltic state capital of Estonia, the leaves have long since disappeared. The skeleton trees form tormented silhouettes against the cold, grey sky - a stark winter nakedness, just like the people in enjoying the heat and steam of the hotel sauna back down the road.
Estonia lies on the edge of the Eurasian land mass. A tiny country with a population of just 1.3 million, spread out over a natural and largely unspoilt Baltic landscape. Having only been independent from the former Soviet Republic since 1991, it is also a very young country.
Before that it was an impoverished Soviet bloc republic fronting the chilly Baltic Sea. When you gaze out from the parapet encircling the attractive old town, the Soviet era brutalist-style concrete block towers perch awkwardly in the vista. They still provide many of Estonia’s citizens with utilitarian apartment living.
There is a distinct sense of place here. Beautiful architecture abounds in the medieval town, in contrast to the austere grey tenements and blocks of flats further out. But everywhere is neat and not a speck of dropped litter anywhere.
Someone tells me that it is all very different in the summer when the long hours of daylight transform the capital Tallinn, and I can only imagine what it might be like. Not as now when the light on an overcast day rarely gets above the dim setting.
From the hotel there was a short climb towards the old city walls. Turn left at the top and you enter a jumble of cobbled streets, flanked by the impressive parliament building to my left and the towering  orthodox cathedral opposite.
Outside of the parliament building was a large group of young children, probably aged around ten years old and obviously mounting a small protest of some kind. They were happy to talk in almost perfect English and told me theywere adding their voice to the climate “emergency”, inspired by the teenage Greta Thunberg. A very modern sign of the times set poignantly amongst the architecture of the past.
The cathedral itself, built to a design by Mikhail Preobrazhensky of St Peterburg, reflects the typical Russian revival style of the late 1800s, during which modern-day Estonia was part of the Russian Empire. 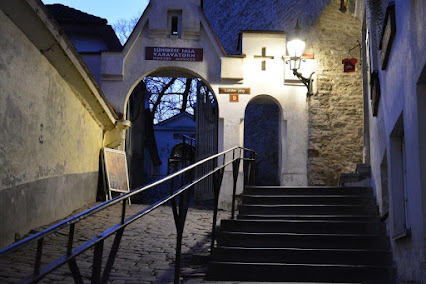 The wind was bitterly cold as I trudged the steep flight of steps towards the imposing main entrance of this architectural masterpiece. It was the date anniversary of my father’s sudden passing three years before and inside I purchased a candle for a euro from a polite old lady at the desk to light in his memory amongst the other flickering flames of prayer and remembrance.
The old part of the city on the top of the hill was a cris-cross of lanes and beautifully styled old buildings. I headed past another immense church and down a narrower cobbled street towards some lights.
It was three pm in the afternoon and the short autumn daylight was already fading to dusk on a day which had been murky since breakfast time. Candles burning in lanterns framed the arched gateway to an old courtyard with a welcoming warmth. A stylish pot cat was tethered with a bight red leather lead to the bottom of the gatepost.
Even with woollen gloves my hands were numb but inside the courtyard there was welcome shelter and respite from the cutting breeze. Small tables and chairs were arranged around the courtyard, each with their own candlelit lanterns, and a potter’s workshop lay to one side. No one was sitting outside today but at the far end was an inviting small doorway to a cosy-looking café. I ventured through the double doors, seeming much like a basic air lock designed to keep the heat in and the bitter cold out.
Inside it was dim, the lighting soft with candles burning on each of the tables. The atmosphere made the coffee and local cheesecake taste especially good and I decided I quite liked Tallinn, even on such a cold and austere, early winter’s day. 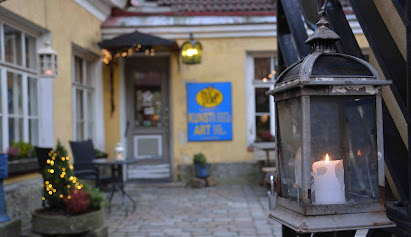