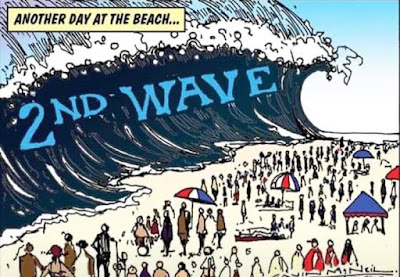 THE Covid-19 pandemic has been the ultimate test for any government. And by just about any measure you care to use the UK government has spectacularly failed - practically, strategically and morally.

Let’s be under no illusion. The lockdown easing announcements of this week have not come about because the time or the conditions are right.

Sadly, in the 24 hours up to Thursday (28 May), 256 more people across the UK died. Johnson says that meets his test for easing the lockdown.

But compare that to a country like South Korea where 269 people have died during the whole of the pandemic.

In other countries where lockdown measures are being eased the daily death tolls are being measured in tens not hundreds still.

In addition, given that the estimates for daily new coronavirus cases in England are approx 8-9000 a day and the ‘R’ rate in many places is hovering only just below one, it feels like the mistakes of early March are in danger of being repeated.

Let's be in no doubt. Lockdown measures in England are being eased now because popular headlines are needed to buy Johnson credit and time.

In this context, it is essential to understand Johnson and his government don't really give a stuff about the British people.

We're in the middle of a pandemic but there's only one real item on their agenda - to leave the EU transition period on 31 December without an EU trade deal.

Conveniently, it means the opposition’s job will be that much harder and the government’s power that much greater.

This is what “taking back control” looks like and it should matter to us all. At a UK-wide level, the House of Commons is the only democratically-elected institution in the country and if nearly 600 of our MPs are shut out of Parliament, democracy is effectively partially suspended.

And, of course, the Cummings episode of the past week makes a mockery of the populist claim of an anti-elitist government looking out for the good of the public at large.

The idea that a country, battered by a pandemic, should be led into the calamity of an EU no deal in just six months' time - or even just to the shocks of moving from single market membership to a limited trade agreement - is seriously crazy.

Coronavirus is already reshaping the political landscape. For any honest government, it should also be reshaping the arguments for an EU transition period extension which has to be decided on by mid-June.

Johnson and the Brexiters would love to pull things back to the heady ‘will of the people’ days. But, to coin an over-used phrase this week by you know who, the people have “moved on”.

Almost everyday the British prime minister is exposed as being completely out of his depth in almost every respect, heading a government which looks exhausted, incompetent and bereft of common sense.

As Chris Grey, Professor of Organisation Studies at Royal Holloway, University of London, says: "It is seemingly intent on acting only in the interests of a small faction of fanatical nihilists.

"To drag the country towards an even greater disaster at the end of the year on the back of political ideology becomes more grotesque by the day in every conceivable way -  democratically, intellectually, economically and morally."

Further reading:
The truth about Dominic Cummings
Not moving on, not going away