If leaving me is easy 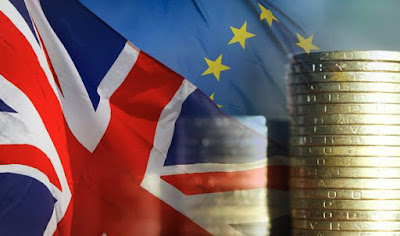 THROUGH the lens of the global Covid-19 pandemic the uncertainty delivered by the EU referendum exactly four years ago today (17 June 2016) now seems to be growing worse by the day. And, for a government determined to follow its Brexit ideology at all costs, an unexpected virus has been the perfect smokescreen.

Back in 2016, promises proffered by the Vote Leave campaign won the day, albeit by the slimmest of margins. Those promises, however, have not only failed to materialise but have largely been exposed as a cache of blatant lies.

Despite the severest of economic storms generated by the coronavirus pandemic, it would seem that the British government, under the leadership of Boris Johnson, is happy to pursue either of two suicidal options - the most basic of severance arrangements with the EU or no deal at all.

With a final deadline for agreement all but ignored, Britain as a country stands on a precipice and is in grave danger of being driven into a black hole by manipulative and evil forces. Anyone who understands the physics of black holes will know there is no return from such a cosmic catastrophe.

Four years ago the PR spin and slogans of Vote Leave were carefully created to tap into a public mood of general dissatisfaction.

Blaming just about everything that was wrong with the country on a beleaguered EU worked well and one of the most dishonest and manipulative campaigns in political history, which also broke so many rules and regulations in the process, won the day.

In reality, extreme wealth and greed were the poisonous roots of a long-festering anti-EU drive. Much of this stemmed from the long anticipated ‘Anti Tax Avoidance Directive’ designed to ensure mega companies and billionaires pay a fair share of tax in their country of residence or operation, rather than be able to shift it to tax havens.

Surely this was a logical and sensible piece of legislation? But when this new directive was finally approved by 27 of the then 28 EU nations, it was the UK that abstained.

Since 2016, the real Brexit has gradually unfolded scene by scene, a tragedy of self-inflicted deprivation - the loss of rights, freedoms and privileges; the loss of standards and ethics; the loss of opportunity, jobs and prosperity; the loss of relationships, reputation and influence; the loss of dignity, humanity and diversity. 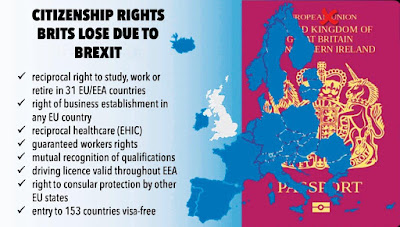 In complete opposite to the trite referendum campaign slogan “taking back control”, it has already heralded the loss of many of the country’s fundamental democracies and international respect and influence.

And, according to a Bloomberg Economics analysis, Brexit is on course to cost the UK more than its combined total of payments to the European Union budget over the past 47 years. 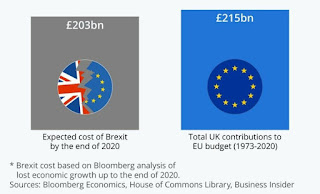 Four years on, as we look back with hindsight, one cannot fail to be struck by the transformation of politics and society. The Johnson government continues to put its pure Brexit ideology before the good of the country.

Now it hails a liberated UK. But if further chaos ensues from the start of next year when the transition period ends you can be sure the narrative will shift, probably to blame Covid-19 and the EU at the same time. To date Brexit has changed everything and served up nothing.

Happy EU referendum anniversary everyone!
Posted by Clive Simpson at 15:47